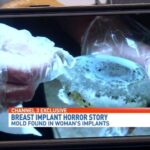 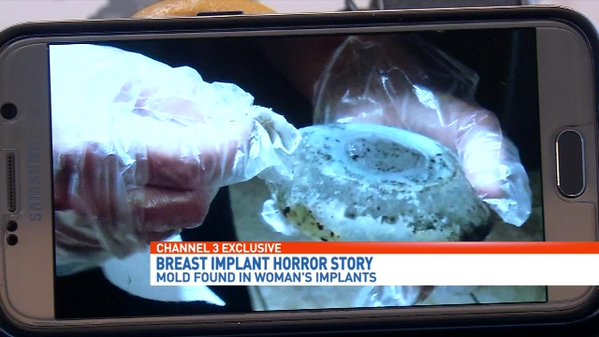 More than 300,000 women get breast implants every year in the U.S. A Shalimar, Florida, woman has a warning for them.

She says her implants nearly killed her. You may have seen some of the articles popping up on Facebook and various websites, linking mold in saline implants to a host of health problems. Anne Ziegenhorn says they are frighteningly accurate.

If Ziegenhorn had known the price she’d pay for beauty, she would have run the other way. She said, “It’s not a story a multi-billion dollar industry wants to get out.”

Anne keeps a video on her phone of the saline breast implants covered with mold, that were removed from her body after a two-year nightmare.

“I felt like that was it, I was gonna die, and the doctors were gonna let me die,” Ziegenhorn said.

It started in 2011. The woman who was a picture of health suddenly started gaining weight, losing her vision and experiencing burning, unrelenting pain. She had sores all over her body. Her thinking was so cloudy she thought she might have Alzheimer’s. She was misdiagnosed with everything from lupus to arthritis to thyroid problems. She said, “Silicone sickness in and of itself is one entity. And then you add the mold to it that we had, and then you’ve got two illnesses going on.”

My experience in doing this for 30 years is that eventually everybody will become ill from their breast implants, unless they die sooner from something else.

Dr. Kolb says she’s seeing lots of women with mold in their saline implants, often from defective valves. She says some patients also have detoxification problems, that make them particularly sensitive to the silicone shells of the implants. She says in 25-30 percent of the population, the reactions are debilitating. The doctor is not anti-implants, she has them herself. But she believes for safety, women need to get their implants replaced every eight to fifteen years. Amanda Gilcrease is a patient who had her implants removed. She said, “All the neurological symptoms… the burning, numbing, stabbing, shooting, electrical shocking pains throughout my body went away immediately.”

Through Dr. Kolb, Anne Ziegenhorn met other women suffering the same frightening symptoms. They formed “The Implant Truth Survivors Committee” to educate women and doctors, and to force the FDA to listen. She said, “I literally willed myself to live and willed myself to get this message out here This is my purpose, this is why I’m here.”

Channel 3 called the FDA to see if they’re getting any reports of illnesses from mold in saline implants or from the silicone shells. Their spokesperson said he’s not familiar with any such reports. The agency does say that most women will eventually need to have their implants replaced.