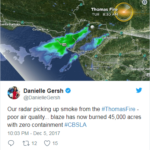 VENTURA (CBSLA) — With two large brush fires burning in Los Angeles and Ventura counties, air quality was visibly bad Tuesday, even with strong winds blowing much of the smoke out onto the ocean. 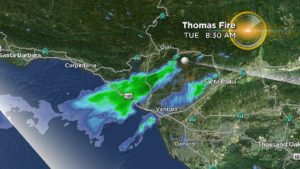 Our radar picking up smoke from the #ThomasFire – poor air quality… blaze has now burned 45,000 acres with zero containment #CBSLA

A large bank of smoke from the Thomas Fire was visible from SKY2 over Ventura, Santa Paula and Ojai. The strong winds that are pushing flames west are similarly scattering plumes of gray smoke out over the region.

Further inland, the Creek Fire burning over Sylmar is giving an apocalyptic hue to the morning commute along the 5 Freeway. 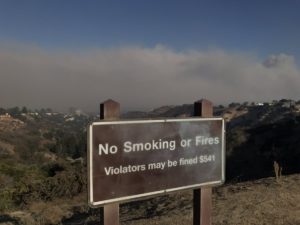 Horrible air quality in the valley this morning due to the #creekfire as viewed from Mulholland Drive. Most of the valley can’t be seen from up here. @CBSLA

Further inland, the Creek Fire burning over Sylmar is giving an apocalyptic hue to the morning commute along the 5 Freeway. 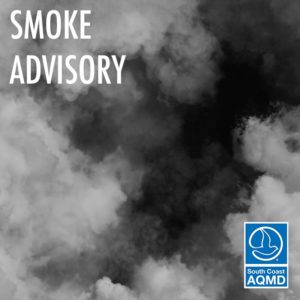 SMOKE ADVISORY: the #CreekFire near #Sylmar and #LakeViewTerrace is affecting our air quality: http://bit.ly/aqmdadvisory2

A smoke advisory issued by the South Coast Air Quality Management District says that wind-blown smoke is making the air most hazardous in the San Fernando Valley and Malibu areas. The agency says everyone in these areas should avoid vigorous outdoor or indoor exercise, and people with respiratory or heart disease, pregnant women, seniors, and children were urged to remain indoors.

More than 50 miles away, officials from the Santa Monica-Malibu Unified School District said that even though classes are in session, students are being kept indoors due to smoky conditions.

“School is in session; however, we will be running on an indoor schedule today, including for physical education, lunch and recess,” a statement from Superintendent Ben Drati posted on the district’s website said.

The Thomas Fire also forced the Getty Center to close to the public “to protect collections from smoke from fires in the region,” according to Getty officials. The Villa in Pacific Palisades is also closed, per its usual Tuesday schedule.

Southern California is enduring its second day of destructive Santa Ana winds that are being blamed for whipping up flames from both brush fires and sending embers beyond fire lines to start new fires.

Red Flag warnings, signifying the risk of wildfires, remain in effect across most of Los Angeles County and down south into Orange County. Tuesday’s warnings are scheduled to expire at 6 p.m., but forecasters say Santa Ana winds could persist into Friday or Saturday.

The gusty winds also have the potential to bring down trees and power lines, and already brought down several big rig trucks along the 210 Freeway in Fontana.