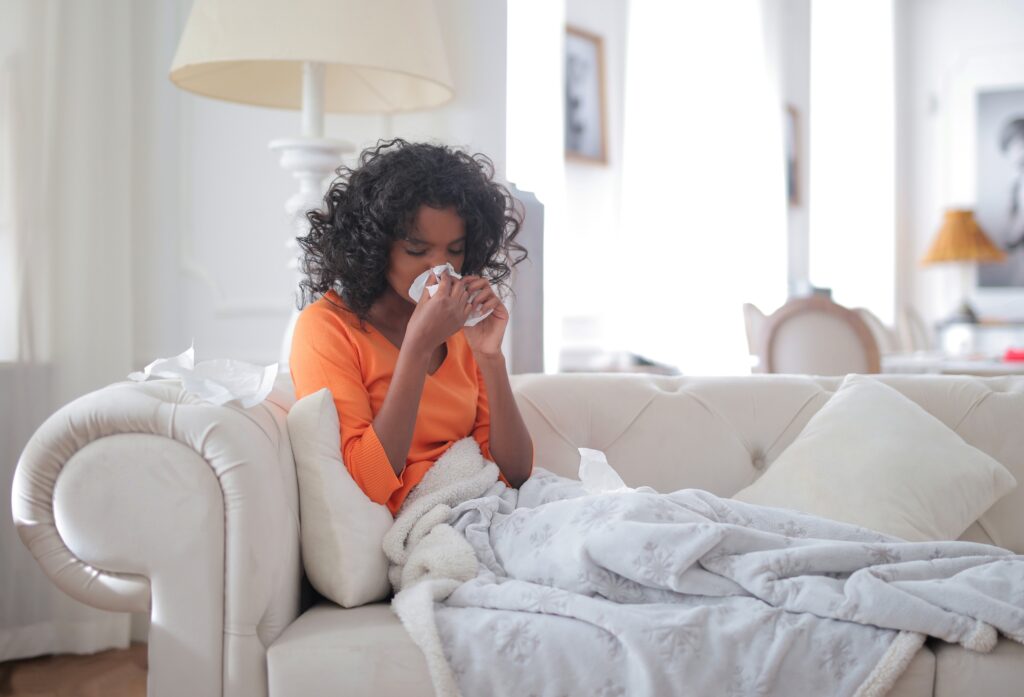 What does climate change mean for allergies and asthma in children?

Rising global temperatures are detrimental to not only our ecosystem but also our health by, for example, affecting the food supply and exacerbating diseases. Many studies have examined correlations between climate change and illness, from cardiovascular to respiratory disease. For allergies and asthma, emerging data are emerging about the possible effects of climate change, such as contributing to the onset of allergic diseases and asthma and creating conditions that worsen preexisting allergies and asthma.

Common environmental aeroallergens include pollen (tree, grass, weed), dust mites, mold, pet dander, and mouse. Environmental allergies are increasing, and it is estimated that up to 40% of children have symptoms of allergic rhinitis.2 In 2018 in the United States, there were 12 million visits for which allergic rhinitis was listed as the primary diagnosis.3 The rise in allergic rhinitis, commonly referred to as hay fever, is likely multifactorial, with climate change playing a pivotal role because of rising temperatures and rising carbon dioxide levels. With global warming and climate change, pollen seasons are longer, and more pollen is produced. Drastic swings in temperature may potentially make pollens more potent.1 It takes a few seasons of exposures for pediatric patients to develop allergic rhinitis, and risk of developing allergic rhinitis increases with age. A study in Europe, which modeled the effects of climate change, estimated that the number of patients with ragweed allergies would double in the next few decades in some regions.4 However, the effects of climate change and allergies are not limited to pollen.

Rising temperatures with increasing humidity also create an ideal breeding ground for mold.1 These conditions may contribute to more mold proliferation outdoors, which can have harmful health effects, especially for patients with asthma. In one study conducted in Chicago, asthma death rates were twice as high when the amount of Alternaria was high outdoors.5

The majority of asthma is allergic in the pediatric population. Multiple factors contributing to climate change and its effects on environmental allergens (eg, pollen and mold) may contribute to the development of asthma or worsening of symptoms. Some studies have demonstrated that climate change effects result in pollens that exhibit stronger immunoglobulin E binding, such as birch pollen, which may contribute to pollen-induced asthma exacerbations.1

Along with global warming and climate change comes increased precipitation and flooding in some regions that can contribute to the proliferation of mold. Dampness is associated with mold proliferation, which is known to contribute to the development of asthma and worsening of asthma symptoms.5 In the aftermath of Hurricane Katrina, clinical studies demonstrated dwellings that were flooded had more mold, and implementing environmental remediation can help reverse the adverse respiratory effects.5

After thunderstorms, asthma attacks and rates of asthma-related emergency department (ED) visits reportedly rise, a phenomenon termed “thunderstorm asthma.” It has been postulated that thunderstorm asthma is mainly driven by grass pollens, but some weed pollens and molds may play a role too. Larger particles of pollen and mold are broken into smaller particles that increase the concentration in the air. During thunderstorms, high winds allow the smaller particles to travel farther, and they may also travel deeper into the lungs and trigger asthma flares or respiratory symptoms.1

With the rise in carbon emissions and other pollutants, these gases get trapped in the atmosphere and diminish the air quality. Major pollutants including nitrogen dioxide (NO2), ozone, diesel fuel exhaust particles, and particulate matter are all known to exacerbate asthma. Additionally, pollutants increase the permeability of the respiratory tract and may enhance the effects of pollens in susceptible individuals. 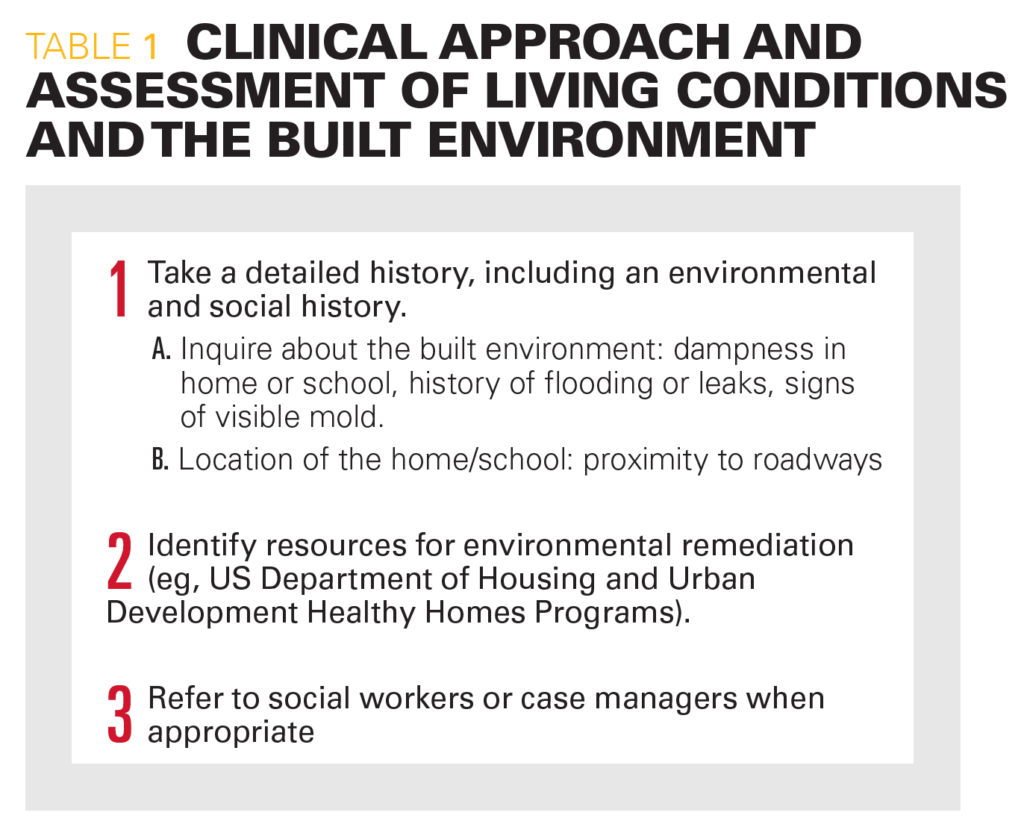 The increasing number of wildfires may also contribute to the development of respiratory disease, including asthma. This is particularly important in pediatric populations because of the small surface area of their lungs. Just a small amount of wildfire air pollution exposure can have dangerous effects on respiratory health. In a recent California study, particulate matter from wildfires was 10 times worse compared with ambient particulate matter exposures, resulting in more ED and urgent care visits for respiratory symptoms, including asthma flares, cough, and wheeze, in children.7 Additionally, recent findings published in JAMA linked wildfires with higher health care use for atopic dermatitis flares, and patients reported worsening pruritus.

In the United States, there are striking health disparities across multiple health conditions. Communities of color and low-income communities suffer disproportionately from prevalence, morbidity, and mortality in many disease states. The effects of global warming and climate change will likely exacerbate health disparities. For instance, Black and Puerto Rican people have twice the asthma prevalence of White people, as well as higher asthma morbidity. Air pollution is known to exacerbate asthma, and there is higher exposure to ambient air pollution in communities of color. In a study conducted in California, despite fuel-efficient cars, traffic-related NO2 levels were higher in communities of color and low-income neighborhoods. Levels were 37% higher in non-White communities.9 Living conditions and the built environment play a pivotal role because, although climate change is a global phenomenon, vulnerable populations are disproportionately affected. For example, in communities of color, schools may have closer proximity to roadways, which multiple study findings show contribute to asthma morbidity. Prenatal exposure, early life, and childhood exposures to pollutants can have a synergistic effect on respiratory health. 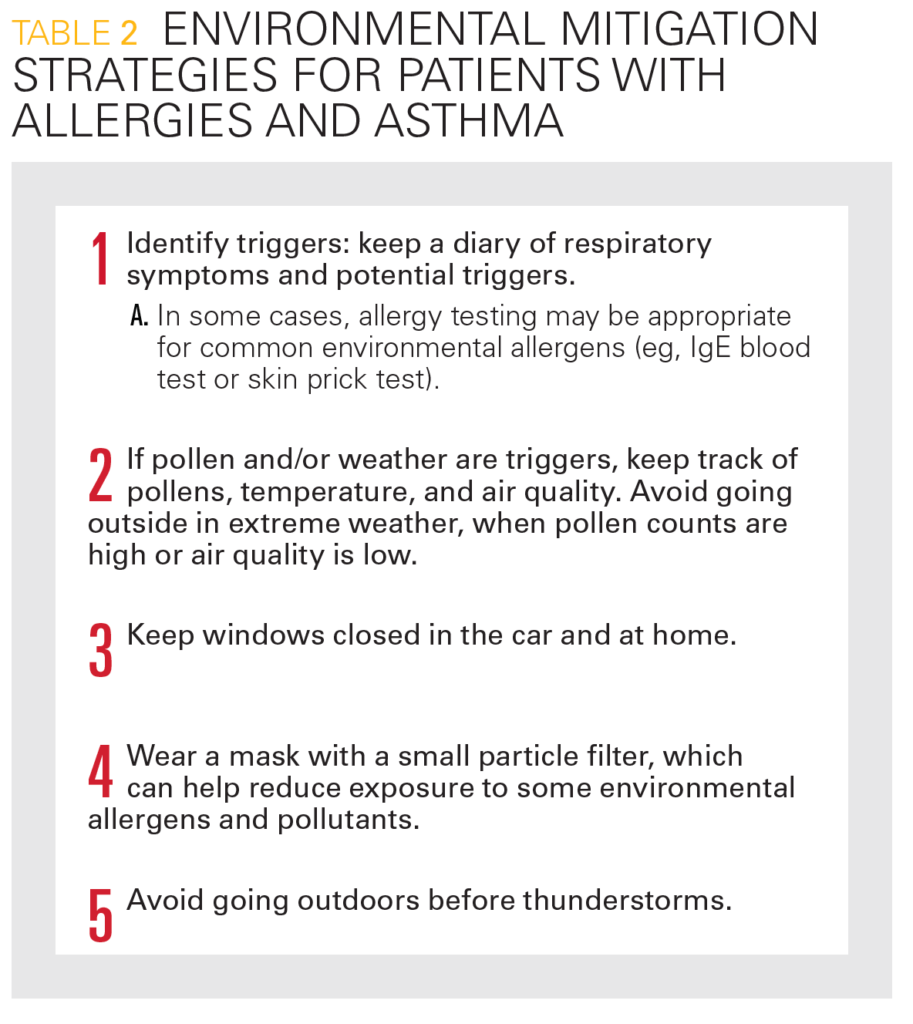 Practicing clinicians play a critical role in helping to combat the climate change’s adverse health effects, starting with evaluating and treating patients. This extends beyond individual patient care and involves advocating for policies to reduce carbon emissions and greenhouse gases, with an emphasis on protecting vulnerable populations who experience the effects disproportionately and are at greater risk. At the individual patient level, it is important to take a detailed clinical history, including an environmental history to assess exposures and refer patients to appropriate resources, such as social workers or case managers (Table 1). Clinicians should also empower patients, providing them with strategies to mitigate environmental exposures (Table 2). It is also important to engage with both local and national medical societies to effect policy changes at all levels. For eg, the American Academy of Pediatrics has a climate change initiative which brings together members and partners to educate and advocate for policy changes to combat the risks of climate change on human health. The voice of the clinician needs to be heard to help ensure that the health needs of patients are at the center of efforts to combat climate change.