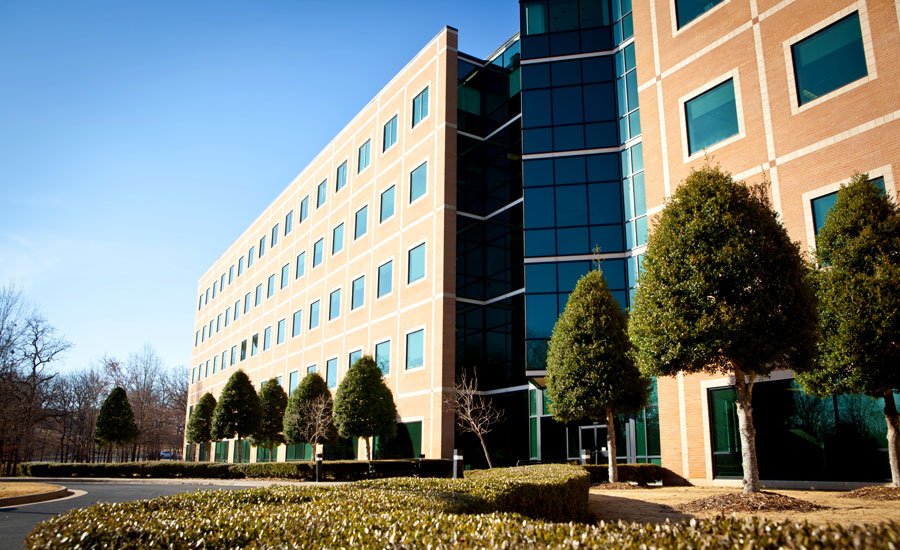 Originally designed to support an occupancy level of 850 people, the Arcbest corporate headquarters has grown to now have 1,085 people plus visitors. Ten percent of the people work at night, requiring 24/7 air conditioning. The increase in occupancy drove a need to introduce more outside air to maintain air quality. All of this outside air had to be conditioned, increasing electrical energy costs. In addition, the extra outside air caused draftiness on cold winter days, and, during the summer, the extra outside air flow through the air handlers resulted in some parts of the building getting too cool. “I previously got calls from people that they were cold during the summer, which was a direct result of having to introduce so much chilled air into the building to meet the appropriate CO2 levels,” said Richard Rieske, director of corporate facilities at ArcBest. “Likewise, they felt drafts during the winter due to all the outside air that was being used to ventilate the building. When the HLR modules are running, our people are more comfortable.”

The corporate headquarters building is in Fort Smith, Arkansas — a warm and humid city in the Southeastern U.S. The 190,000-square-foot building has five floors of office space separated into two wings (east and west primary zones), which are each served by a dedicated air handling unit (AHU). Two staircases connect all building floors.

The building has a central core (bathrooms, coffee rooms) and a peripheral open office plan. There is a computer room on the first floor and executive offices and conference rooms at the southern side of the fourth and fifth floors.

Building return air is an open plenum suspended ceiling type while air is ducted to line diffusers. Building pressurization is regulated on each floor by return air mounted exhaust fans.

The building has a Carrier iVu Building Management System (BMS) running BACnet over MSTP, which can optionally be integrated with enVerid’s HLR® BACnet to control the outside air (OA) damper.

All outside air intake for the HVAC system is demand-control ventilation (DCV) dependent (controlled by space CO2 sensors). The outside air damper is actuated based on an averaged CO2 value on a per floor section basis. Each floor has about 10 CO2 sensors strategically distributed. Although each floor has an open floor plan, CO2 sensors residing in the eastern section on each floor were averaged separately from those in the western section. CO2 set point is observed by the BMS to actuate outside air damper position.

At the start of the project, the building’s central plant on the ground floor had two packaged hermetic centrifugal liquid single-speed chillers (375 tons each). On warm days, the second 375-ton chiller was required, but now, with the enVerid HLR modules, they typically only need a single chiller. The peak HVAC cooling capacity has been reduced by about 273 tons.

“Running a second chiller significantly increased our energy utility costs” said Tom Daigle, manager of building systems at ArcBest. “By using the enVerid HLR modules, we are not conditioning as much outside air, and we are projected to save $63,709 annually.

The kickoff began with a site survey by the enVerid team of the building mechanical layout, an indoor air quality (IAQ) assessment and identification of potential locations for integrating the HLR 1000E systems. The number of HLR modules needed and the resulting outside air reduction were calculated according to ASHRAE Standard 62.1 — Indoor Air Quality Procedure (IAQP) for a typical office building.

The site survey assessed the spaces that are cooled and heated (including stairways and closeted spaces); and documented the existing hydronic systems; power meters; and all DCV, variable air volume (VAV), and AHU interactions in the building, including dampers, sensors, and exhaust systems.

The survey measured and planned for the positioning and installation of the HLR modules, ensuring that they would fit and could be easily moved into position. In this phase, the team also checked for wireless connectivity options and suggested connection points to the BMS.

Lastly, the team took snapshot baseline measurements of CO2, energy use, and other air quality indicators. This information was shared with the facilities management team.

In the installation phase, the enVerid project team selected and supervised electrical and mechanical subcontractors with the customer’s approval. Ten HLR modules, installed in each of the building’s mechanical rooms, will cover all spaces within the building. A split-stream of return air from AHU is ducted through the HLR module to be cleaned. Outside air used for regeneration and regeneration exhaust from the HLR are ducted to the louvered outside air in each mechanical room. Figure 1 shows an example of sorption and regeneration paths. Figure 2 shows a schematic of HLR module by-pass connection to the AHU.

Using HLR technology, ArcBest could take advantage of ASHRAE 62.1 Indoor Air Quality Procedure (IAQP) and use 65 percent less outside air compared to using the ASHRAE 62.1 Ventilation Rate Procedure (VRP).  As a result, the annual energy savings for heating and cooling are calculated to be $63,709.

For IAQ, contaminant concentrations were measured prior to the HLR operation, then again after the HLR module had been installed and running for at least one week. Indoor air quality monitoring was performed per U.S. Environmental Protection Agency (EPA) standards, and the results were analyzed and certified by an independent lab (PRISM Analytical Technologies).

This investigation included environmental and indoor air quality sampling of temperature, relative humidity, CO2, volatile organic compounds (VOCs), aldehydes (e.g., formaldehyde), and particulate matter. These include all the contaminants of concern found in office buildings. The investigation included sampling throughout the building at 10 different locations for CO2, and two different locations for VOCs.  Instruments used were calibrated before each use and functioned within the limits of performance specifications appropriate for pollutants measured in indoor environments.

Peak HVAC load reduction — The HLR reduced peak HVAC load by 273 tons, which corresponds to a 36 percent decrease in total HVAC load. On warm days, ArcBest’s second 375-ton chiller was required, but now with the enVerid HLR modules they typically only need a single chiller. This savings impacts the “demand charges” on ArcBest’s utility bill, which in many locations, has a major impact on the overall cost of electricity. In addition, when ArcBest replaces the HVAC equipment in the future, the peak capacity required will be 36 percent less, providing significant savings in capital expense.

Energy savings of $63,709 per year — Based on sensible and latent energy calculations, the energy savings for reducing outside air by 26,640 cfm equates to $63,709 annually using a standard energy model as applied to Fort Smith, Arkansas, outside temperature and relative humidity data downloaded hourly over the past five years.

Water savings of $11,535 per year — ArcBest was also able to conserve on cooling tower water, but a separate water meter wasn’t available, so this information was not included in the overall project savings. However, based on standard calculations, ArcBest is saving 2.17 million gallons of water and $11,535 in water and wastewater charges.

Earned a one-time energy rebate — The local electric utility offers rebates for energy efficiency projects. The rebate amount is still being determined by the utility.

Maintained Indoor Air Quality — CO2 levels vary throughout the day but are maintained at levels below 1000 ppm.

DCV system no longer necessary — By incorporating HLR modules and using IAQP to manage how much outside air is used for ventilation, ArcBest no longer needs to rely on its DCV system. Additionally, by using the HLR and IAQP, ArcBest is now managing ventilation based on all contaminants of concern instead of just CO2.

Additional Savings — A 65 percent reduction in outside air can extend the lifetime of the outside air filters by two to four times. Also, a reduction in outdoor air intake provides several secondary benefits that include extending the useful life of the existing mechanical equipment and ductwork.

“enVerid’s people are Class A, top-notch, and the HLR system works as advertised,” said Daigle.