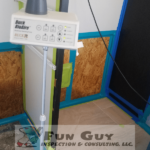 With a unanimous vote, a senate committee on Wednesday approved legislation that would educate schools about the importance of testing for radon, a cancer-causing gas that comes up through the soil and gets trapped in buildings.

The proposal now heads to the full Senate for consideration.

Prompted by a Call 6 Investigation into how most schools don’t test for radon, Sen. Eric Bassler, R-Washington, filed Senate Bill 632 that would require the Indiana State Department of Health to distribute the best practices manual to schools for radon testing.

“I think it’s pretty reasonable to get radon on the radar screen,” Bassler told the Senate Health and Provider Services Committee.

The American Lung Association, Protect Environmental and Your Environmental Services LLC all showed their support for Senate Bill 632 as the Senate Health and Provider Services committee held its first hearing on the legislation.

“We don’t allow children to smoke, and we don’t allow people to smoke in schools, so why would we allow them to be breathing in high levels of radon gas?” Dawn Coffee, vice president of marketing and operations at Your Environmental Services, a radon testing company in Northern Indiana, said. “Last year 75 Hoosiers died in house fires, and yet 600 Hoosiers died of radon-induced lung cancer.”

Supporters of the legislation testified radon is the No. 1 cause of lung cancer among non-smokers.

You can’t see or smell it, so the only way to know if it’s there is to test for it.

“96 percent of Indiana schools haven’t tested for radon in the last 10 years,” Coffee said. “Testing in schools is very important so we know what our students are exposed to, and our students and our teachers who spend 6 to 8 hours a day for several years.”

“Right now, it’s not included in what the State Department of Health gives to school superintendents, so it would simply add radon,” Bassler said. “What this would do is simply recommend to school corporations that they consider testing their schools for it.”

This EPA map shows much of Central Indiana is in a hot zone for radon, meaning the gas is widespread throughout the soil and buildings in our state.

“We’re just naturally more prone to be exposed based on our geology,” Nick Torres, advocacy director for the American Lung Association, told the senate committee. “We believe that providing schools with some of these regularly updated practices as outlined in Senate Bill 632, would just help ensure that testing is done properly.”

Members of the Senate Health and Provider Services asked questions and seemed concerned about the lack of testing in schools.

“It seems to be a pretty significant issue,” Sen. Ed Charbonneau, R-Valparaiso, and chairman of the committee, said.

Indiana currently has nothing in place regarding radon in the classroom.

“We are thrilled to see this bill go forward and hopefully we will see schools testing, and we may be able to in the future add to that,” Coffee said. “We’d love to see required testing, but this is a great first step.”

Call 6 Investigates found a dozen other states have already taken action regarding radon in schools — implementing laws or regulations that require or recommend testing.

In Florida, schools test for radon and report their results to the state department of health.

Illinois has an education law that recommends schools test for radon.

Sen. Eddie Melton, D-Gary, filed Senate Bill 522, which would require public and nonpublic schools to test for radon by July 2020 and at least once every five years after that.

However, Melton’s bill failed to get a hearing this session.

The Indiana State Department of Health does not compile or track which schools are testing for radon.

Call 6 Investigates had to conduct its own analysis to determine most schools haven’t tested for the cancer-causing gas.