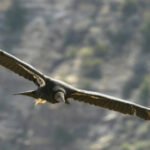 Thirteen of the endangered birds were treated in the past year after ingesting lead, which is about half the average for the last five years.

“We’re hoping that last season’s results are the start of a new trend of decreased lead exposure, and we’re marching down the path of success with that,” said Chris Parish, director of the Peregrine Fund’s Condor Restoration Program. “It’s just one year of data, but the results are encouraging, and we’re hoping that it continues this season.”

Ingestion of lead is responsible for more than half of all condor deaths.

Parish pointed to free non-lead ammunition distribution efforts by the Arizona Game and Fish Department, and others, as a significant contributor to the decrease in lead exposure in condors.