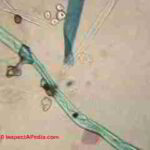 This article describes the common as well as less-common constituents of house dust and typical office building dust. We also cite the occurrence of particles that may indicate indoor air quality concerns, hazardous conditions, or other building conditions that may be detected or perhaps simply suggested by the presence of certain particles in air, in settled building dust, or in vacuum-cleaner collected or clothes dryer-collected dust and lint.

We also provide a MASTER INDEX to this topic, or you can try the page top or bottom SEARCH BOX as a quick way to find information you need.

What are the Contents of House Dust & Office Building Dust 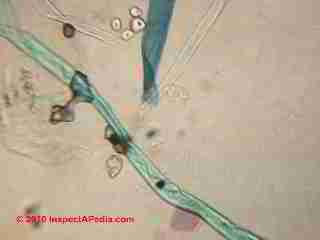 Typical components of house dust and typical office building dust are dominated by fabric fibers and skin cells. Common too are lower levels of dust mite fecals, insect fragments, and air-delivered pollen and mold, though the levels of these varies seasonally and by changes in the indoor environment such as in humidity.

Watch out: usually the dominant constituents of house dust (fabric fibers, skin cells) do not pose a health hazard to humans.

However studies that we will cite here also have confirmed that in some buildings house dust may also include dust particles that carry potentially harmful carcinogens, endocrine disruptors, or that cause other illnesses or disorders.

See MOLD / ENVIRONMENTAL EXPERT, HIRE ? for help in deciding if it’s appropriate to bring in a professional to assess indoor health risks. 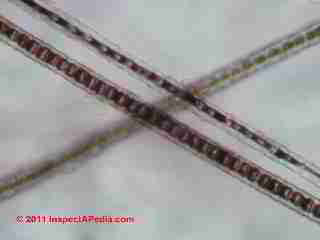 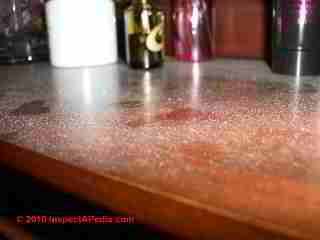 Cat allergens (cat dander) are common and are often more allergenic to building occupants (ALLERGENS in BUILDINGS) than dog dander or animal hair in general.

Our page top photo of typical “dust bunnies” that collect on building floors below furniture and under radiators, and our photo of a dusty table top (just above) are fairly normal of an indoor building prior to typical housecleaning vacuuming and dusting operations.

Watch out: dust is a common and normal material found in almost all buildings.

Do not seek an objective of “no indoor dust” in a normal building: doing so wastes money and time and is not rational. Only in controlled environments such as computer chip manufacturing lines do we expect to find few airborne particles.

Abnormal Levels of House Dust May Not be Acceptable 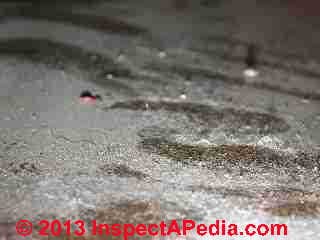 But abnormal levels of certain particles in building air or dust can indeed indicate an indoor air quality or indoor environmental problem that needs to be addressed.

Even if this dust contains only typical house dust components the dust level is likely to be irritating to some people (including the author) who are asthmatic or have allergies.

So how do we decide between just cleaning up obvious dust and debris indoors and the need to hire a building expert to look for hidden contaminants and if found to write a building remediation plan?

At MOLD / ENVIRONMENTAL EXPERT, HIRE ? we give a rational to help decide when further investigation of the indoor environment appears warranted.

We may however find either higher levels of common problem particles (allergens, insect fragments, mold, fiberglass or other insulation fragments) or low levels of particles that by their nature (such as Aspergillus sp. mold spores in chains) still indicate a problem.

Or we may find abnormal and possibly harmful levels of asbestos, concrete or silica, small fiberglass fragments, lead dust, mold at high levels, oil burner or fireplace soot, or non-particulate hazards such as gases or chemicals that are not addressed here. 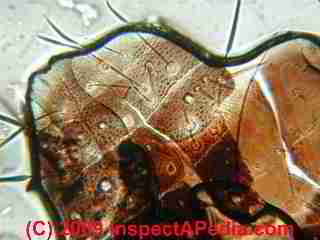 Our photo at above left illustrates a dust mite head fragment. 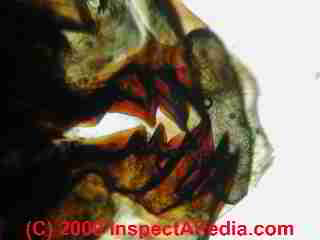 Still other biological hazards can be present such as bacteria and viruses. And particularly for buildings near highways, active streets, construction or demolition projects, tire particles, road dust, and CONCRETE DUST & ODORS can be significant ingredients in indoor air and in building or house dust.

All of these may appear at harmless, harmful, or suggestive levels in building dust or other indoor environmental samples.

In addition to our example data and photographs, this article includes citations to authoritative research on the components of house dust, building dust, vacuum-cleaner dust, and clothes dryer dust. 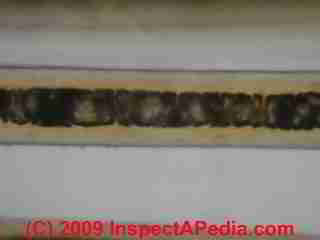 At above left we illustrate a microscopic close-up of dog hair, in this case from a golden retriever. 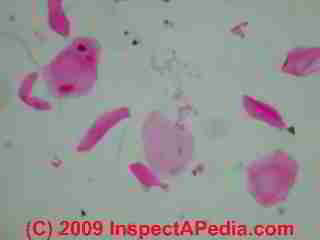 The photo above illustrates a mix of skin cells (larger fragments) and dog dander heavily stained with acid fuchsin. Normally these particles are hyaline (colorless). 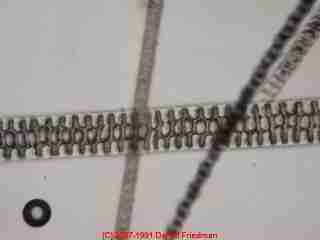 Examining animal hair samples in a building may be diagnostic for a different reason. Above: chinchilla hair.

The dust mite fecals in our photo at below left along with the background of this picture give important building diagnostics.

The fecal pellets themselves are comprised largely of mold spores, and in the background (not in focus) are spore chains that are most likely Aspergillus sp. or Penicillium sp. 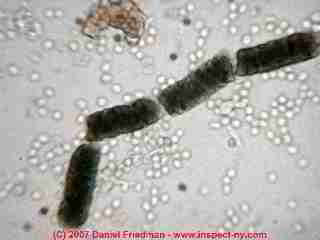 While it is normal to find mold spores in both outdoor and indoor air (“all mold is everywhere all the time – it’s just the concentration that varies” – Haines), observing mold spores that dominate the sample by frequency or even at low levels in chains is likely to indicate a mold contamination reservoir in the structure where this sample was collected.
See CONCENTRATION BURSTS of Mold Spores

Finding particle in connected chains – in this case both the fecal pellets and the Pen/Asp spores – often indicates a contemporary and nearby contaminant source. Why? Because normally in transport through air these chains are quickly broken apart into individual particles.

Watch out: We do not recommend that every building be screened for mold nor other problem particles. But when conditions warrant, further investigation is appropriate.

There may be other less-expected contaminants in building dust. For example, following a sewage flood or septic back-up in a building, both bacterial and viral hazards may be attached to common house dust particles.
See SEWAGE CONTAMINATION in BUILDINGS 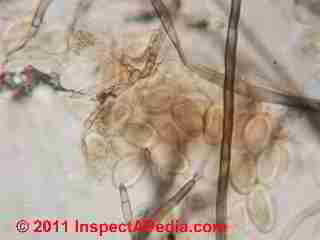 An interesting example of a surprise particle found in building dust is shown in our photo at left.

While an initial inspection did not show structural damage to the wood framed home where this sample was collected, I saw some yellowish “dust” under a kitchen sink cabinet and on nearby sills. In the lab it was quickly apparent that we were looking at spores of Meruliporia incrassata or “poria” referred to by those who prefer scarier terms as “the house eating fungus”.

We don’t normally find this particle in buildings unless there is a rot problem. Further investigation of the building floor framing and sills found extensive rot damage that had not at first been apparent. (MERULIPORIA FUNGUS DAMAGE)

And the collapse of the world trade center demonstrated (World Trade Center Collapse Dust) that in extreme conditions, for which more normal building remodeling or demolition are surely examples, dangerous levels of asbestos, lead, other metals, may be present in the building air and dust. 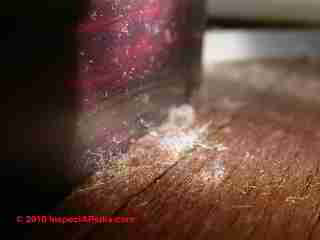 Magnified to 720x dust particle fibers found in a healthy building are primarily cotton, wool, with some linen and a synthetic fabric fibers. Depending on the presence of carpeting the fiber mix will vary according to the carpet or other furnishings.

At left and in the photo at page top we illustrate simple settled dust on indoor horizontal surfaces. For building particle screening I like settled dust samples even though simple quantitative analysis cannot be performed.

By observing what particles are dominant in such a sample and by watching out for unusual particles that still form contamination clues we can get a good idea of what particles are actually indoors. At the same time we steer clear of the serious errors that plague highly precise but grossly -inaccurate air particle testing.
See ACCURACY vs PRECISION of MEASUREMENTS and AIRBORNE MOLD COUNT VALIDITY

Watch out: While “air tests” or air sampling methods for particle collection are popular with many building investigators (quick, easy, profitable), such tests, when not accompanied by an intelligent inspection of the building exterior and interior along with a taking of building history, components, and occupant complaints, is simply not reliable, especially if results appear “negative” (FALSE NEGATIVE Results in Mold Tests).

I elaborate this opinion at AIRBORNE MOLD SPORE COUNT ACCURACY.

In some buildings, potentially harmful chemicals or particles borne in, on, or attached to particles of ordinary house dust. Some of these substances include lead, arsenic, Bisphenol-A BPA , cadmium, mercury, lead, pesticides, polycyclic aromatic hydrocarbons (PAH), and others.

It is possible that even at lower absolute levels particles bearing hormone disrupting chemicals or possible carcinogens such as PBDEs are unsafe, particularly for populations at extra risk, such as pregnant women, the elderly, children (Gevao 2006), people who are immune-impaired, asthmatics. 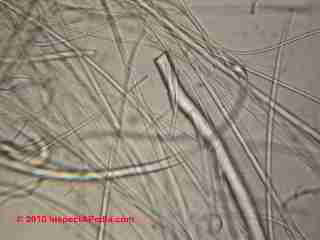 Above we show a 720x micro-photograph of white blown-in un bonded InsulSafe® building insulation sold by CertainTeed. Just below our photo shows the dominant particles in the dust sample from the home under study. 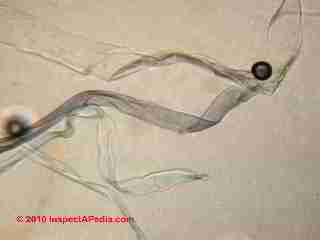 At DUST SAMPLE TYPES we distinguish between “old house dust” and “recent house dust” which in turn can aid in building indoor air quality investigation diagnosis.