Cooking with Tammy: Obsessed with Mushrooms

Cooking with Tammy: Obsessed with Mushrooms 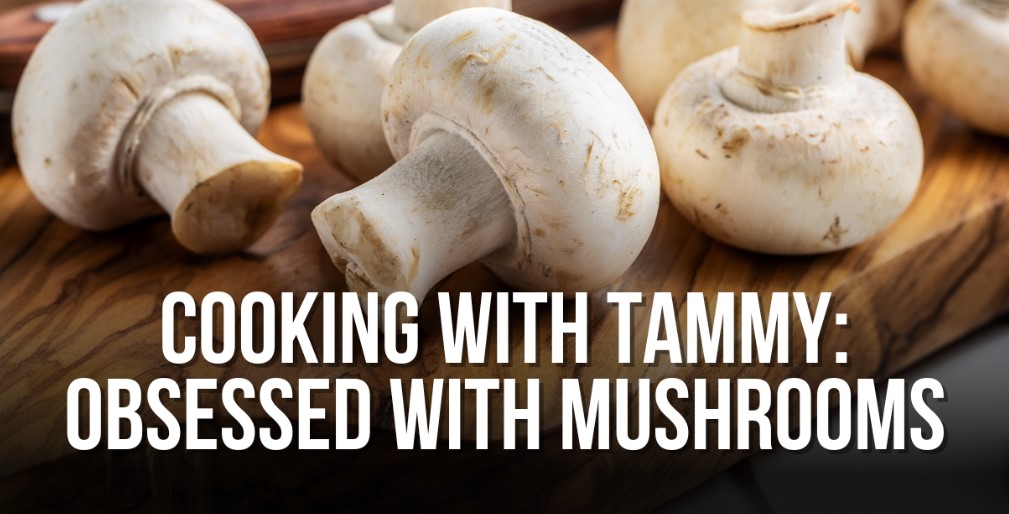 Mushroom are health food all-stars, and lately I want to add them to everything!!  They pack savory flavor to meals without adding much fat, calories or sodium.  Researchers continue to discover how mushrooms can ward off chronic disease and improve your everyday health!

Some of the most notable health benefits of mushrooms include;

–          Mushrooms are naturally low in sodium, an entire cup has only 5 mg of sodium.  By adding savory flavor, they decrease the need for additional salt.  By adding a cup of sliced mushrooms to lots of recipes you can reduce your levels of sodium!

–          Often mushrooms can take the place of red meat, which will minimize calories, fat and cholesterol.  Even if you don’t replace the red meat, you can use half the amount by adding the mushrooms.

–          A recent study of how mushrooms can decrease the risk of cancer reveals that by eating 1/8 of a cup pf mushrooms a day will lower your risk of cancer by as much as 45%.  They are a powerful source of an amino acid and antioxidant that prevents or slows cellular damage.

Heat oil in a large nonstick pan over high heat.  Add zucchini and cook, stirring for 2 minutes.  Add mushrooms and basil and cook, stirring until softened, about 1 minute.  Season with salt and pepper.  (I like to add a sliced onion to this mix!).

¼ cup olive oil, plus a small amount to use in the pan

1 cup shredded gruyere cheese (you may substitute a different cheese, like maybe Swiss)

Preheat the oven to 400 degrees.  Grease a 2-quart baking dish with olive oil (or spray with nonstick spray).

Heat the olive oil in a large deep skillet over medium high heat.  Add the mushrooms, onion, and salt.  Cook stirring occasionally until mushrooms are tender, about 10 minutes.

Transfer the mixture to the baking dish.  Sprinkle with the shredded cheese.

Bake until hot and bubbly, about 15 minutes.  Serve.

In a large skillet, heat 1 tablespoon oil and 1 tablespoon butter together at medium high heat.  Season the sliced chicken with salt and pepper.  Once the pan is hot and the butter is melted, brown the chicken and cook through, about 2 minutes.  Remove chicken from the pan and set aside.

In the same pan and add 1 tablespoon oil and cook the onion until lightly browned, about 2-3 minutes.  Add the sliced mushrooms and cook until tender, about 2 minutes.

Add the white wine to the pan and let simmer until reduced to about half.  Add the chicken stock and cream.  In a separate small bowl combine corn starch and water.  Stir until starch is completely dissolved then add to the sauce.  Bring to a boil and let simmer without a lid at high heat for about 2-3 minutes to reduce and thicken the sauce.

Add the cooked chicken back to the pan and simmer for about 30 minutes.

Stir in parsley and season to taste with salt and pepper.

Serve over pasta, or to cut the carbs serve over zucchini noodles.

1 tablespoon fresh thyme leaves, you may want to add additional for garnish

Whisk eggs, milk, half-and-half, mustard, thyme, salt and pepper in a medium bowl.  Fold in the mushroom mixture and cheese.  Spoon into the prepared pie plate.  Bake until set and golden brown, about 30 minutes.  Let stand for about 10 minutes to set and slice.  Garnish with thyme if desired.

Melt butter in a saucepan.

Add mushrooms, onions, and garlic.  Cook until the mushrooms have released most of their liquid, about 7 minutes.

Season to taste with salt and pepper, and add heavy cream.  Simmer for about 15 minutes.