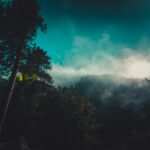 On the heels of the Snell Fire in Napa County, the Bay Area Air Quality Management District [BAAQMD] warns that, once again, smoke from the state’s many still-burning wildfires could pose a threat to the Bay Area, putting a Spare the Air warning in place over the weekend that will last through Tuesday.

According to the BAAQMD, “Upper level smoke from wildfires may impact visibility in northern and eastern parts of the Bay Area,” through September 11. The agency goes on to say that “if it looks smoky outside, avoid physical outside activities” and “keep indoor air as clean as possible” by keeping the windows closed.

Looking at the EPA’s AirNow air quality site, it appears that conditions in the Bay Area over the weekend were consistently clear during what turned out to be a resplendent couple of days in most areas.

On Sunday, for example, patches of “moderate” quality bad air did spread across parts of the North Bay and East Bay, as predicted.

But conditions never worsened beyond the “moderate” level on the EPA’s air quality scale (the second least worrisome measurement of air pollutants). In San Francisco and the rest of the region, skies remained clear.

Today’s AirNow forecast calls for more extensive haze in the North Bay; however, the outlook remains sound for SF and other more southern regions.

Even so, the warning remains in effect.