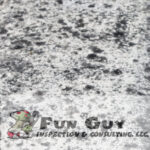 Mold from Earth has long found its way aboard the International Space Station (ISS) but no one knew it could survive 200 times more radiation than any human can, posing “planetary” threats to the solar system, a new study says.

At times, mold seems omnipresent, and the International Space Station is no exception. Some spores are being grown by astronauts during experiments, while others appear naturally.

The two most commonly found types of mold on board the ISS are fungi Pennicillium, which is used to make penicillin, and Aspergillus. The new research by Marta Cortesao, a microbiologist at the German Aerospace Center in Cologne,shows that both of these microorganisms can survive insane doses of radiation that can easily kill a human.

The scientist discovered this by bombarding the mold with X-rays and high-frequency ultraviolet light in a lab. The exposure to radiation is measured by gray, a unit describing how much energy something can absorb. Anything above half a gray causes radiation sickness, while five gray is lethal to humans. The mold, on the other hand, survived being blasted by X-rays up to 1,000 gray.

We now know that [fungal spores] resist radiation much more than we thought they would, to the point where we need to take them into consideration when we are cleaning spacecraft, inside and outside,” Cortesao said before presenting her report at an astrobiology conference in Seattle last week.

The good news is that space travelers can use the cells from the radiation-resistant mold to make important substances like antibiotics and vitamins during long missions, the researcher said.

The flip side is that fungi such as Aspergillus could pose a threat to astronauts’ health, causing lung diseases, especially if the immune system is weakened. On top of that, the resilient mold spores from Earth may contaminatewhole planets and moons in our solar system during spacecraft visits.

A 180-day trip to Mars, for example, exposes the spaceship and everything on board to a dose of about 0.7 gray, so the spores of Aspergillus “are expected for survive” the voyage, considering the radiation alone, the report reads. So, in order to avoid accidentally sparking a mold invasion of other worlds, Marta Cortesao calls for adjusting future “planetary protection” policies.