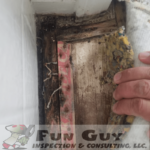 Military families described living in decrepit, dangerous and inescapable homes at a Wednesday hearing, where lawmakers expressed shock over the allegations of slum-like conditions of privately managed housing.

The emotional testimonies came on the same day as the release of a survey that painted a grim picture of living conditions at U.S. bases for thousands of families, including black mold, lead, infestations of vermin, flooding, radon and faulty wiring.

Families said their concerns have been met with resistance, and in some cases threats from property management companies and commanders to silence them.

Crystal Cornwall, a Marine Corps spouse, told lawmakers about termites falling though light fixtures at an air base in Mississippi and mice chewing through infant pacifiers at Camp Lejeune, N.C.

“I wouldn’t recommend my own children join the service, and my husband has been a Marine for 12 years,” she said.

Some families said their children have been sickened by toxic living conditions but felt they had few options to hold companies or commanders accountable.Sen. Martha McSally (R-Ariz.), a former Air Force pilot, described the stories as “disgusting” and infuriating.

“They left you hanging. They put you in harm’s way,” McSally told a panel of three military spouses, describing the companies. “Somehow we need the chain of command . . . to be able to poke their finger to poke in the chest of these companies to say ‘fix it now, or you’re done.’ ”

Sen. Tim Kaine (D-Va.) said he was left baffled during opening remarks in the Senate Armed Services subcommittee hering. “It gets harder and harder to shock me,” he said. “This is shocking.”

During the hearing, the executives struck a conciliatory tone.

“The situation is clearly unacceptable,” said Denis Hickey, the chief executive of Americas Lendlease Corporation said. Christopher Williams, the president of Balfour Beatty Communities, said: “When we fall short, we try to make it right.”

In a joint statement, Army Secretary Mark T. Esper and Army Chief of Staff Gen. Mark A. Milley said they were “deeply troubled” by reports of unsafe housing.

“We will hold our chain of command and private contractors accountable to ensure they are meeting their obligations to provide safe, high-quality family housing,” they said.