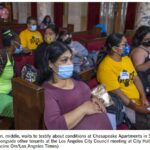 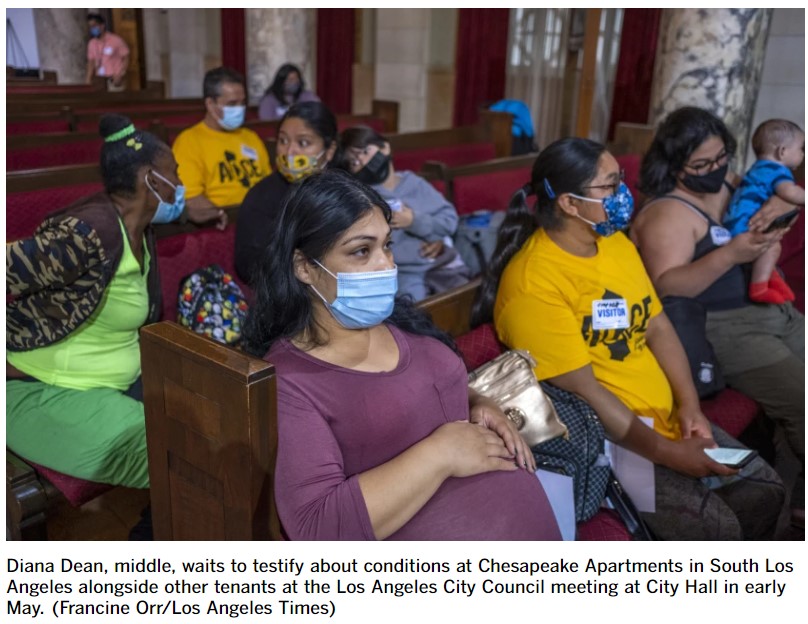 Problems with mold and vermin, broken tubs and showers and other slum-like conditions continue to mount at a massive South Los Angeles apartment complex even as politicians, housing and public health officials are pledging to hold the landlord accountable.

City and county inspectors are planning to reassess all 425 units at Chesapeake Apartments in early June, following a Times story in April that revealed widespread tenant complaints and public health violations, including leaking sewage and gas and electrical failures.

“It’s not acceptable,” said Robert Galardi, the chief inspector at the city housing department. “The building is in need of some major renovations.”

Galardi said the complex-wide inspection could be the precursor to sanctions against the building owner, Pama Properties, including enrollment in a city program that withholds rent from landlords to force them to repair blighted conditions.

For years, housing inspectors and others responsible for overseeing Chesapeake Apartments have missed obvious warning signs about its extensive deterioration and at other buildings owned by Pama Properties and Pama President Mike Nijjar. The World War II-era Chesapeake complex stretches across multiple city blocks in the Baldwin Hills/Crenshaw area, with nearly two dozen two-story buildings constructed around courtyards and open-air parking lots.

County public health officials have found 205 violations at Chesapeake Apartments since 2017, an average of more than three per month and the most of any residential property in L.A. County during that time, a Times analysis found. Violations have included mold, rats and plumbing problems. Over the same period, more than 100 complaints have been filed with city housing inspectors over conditions at the property, including missing and faulty carbon monoxide and smoke detectors and gas and electrical issues, according to a Times review of city data.

Companies linked to Nijjar own more than $1 billion in real estate, predominately in Southern California, and many other properties also have had serious health and livability problems, according to a 2020 investigation by LAist. Five years ago, L.A. City Attorney Mike Feuer sued Pama Properties and Nijjar over crime concerns, reaching a settlement that required safety and habitability upgrades.

In January L.A. housing inspectors completed an assessment of Chesapeake Apartments that’s required every two years. Officials identified 71 violations during that inspection, but said all were corrected and gave the complex a clean bill of health. Galardi conceded that review failed, and that about half of the units were never examined.

Many tenants had placed notices on their doors advising inspectors not to enter their units, Galardi said, and the COVID-19 pandemic posed challenges. The assessment began in November, just as the Omicron variant’s wave of infection was hitting Southern California.

“I wouldn’t say the system’s broken,” said Galardi, who visited the property and met with tenants and organizers last month. “I would say that the timing in the pandemic had a big impact on [inspecting] such a large community.”

Jim Yukevich, an attorney who has represented Nijjar in litigation with the city, did not respond to a list of questions from the Times. Previously, Yukevich has said that his client takes health and safety issues seriously at all his properties and makes repairs when notified by tenants.

Since the Times story published last month, staff members for the federal, state and local officials who represent the area, all Democrats, have been meeting to discuss conditions at Chesapeake Apartments.

County Supervisor Holly Mitchell called the situation “horrendous” and said that the severity and longstanding concerns with the property required public agencies to penalize the landlord and ensure speedy and complete repairs.

“We’re at the point now where that strong, clear, decisive action needs to be taken,” Mitchell said.

U.S. Rep. Karen Bass, State Sen. Sydney Kamlager, Assemblymember Isaac Bryan and L.A. City Councilman Herb Wesson declined or did not respond to Times interview requests. After the initial Times story published, Bass, who is running for Los Angeles mayor, called on Nijjar’s companies to make immediate repairs to Chesapeake Apartments, relocate tenants until the work was complete and give them the right to return to the refurbished property.

Chesapeake tenants say that conditions have remained, or even worsened, since April as Pama Properties has scrambled to respond.

Milton Morris, 39, has lived in a one-bedroom apartment at the property for six years with his wife and 13-year-old daughter. One afternoon last week, an air purifier the family newly purchased whirred as his wife used a breathing machine and daughter clutched her asthma inhaler while doing science homework. Morris said he’s been complaining about problems for years.

An environmental contractor hired by building management in late April found numerous mold spores throughout Morris’ apartment at levels that exceed federal environmental guidelines, according to a report Morris shared with The Times. The contractor also found structural damage in the living room, bathroom and kitchen it called “unacceptable.”

“There’s nothing that they can possibly say to justify this,” said Morris, an in-home healthcare worker who pays $1,346 a month in rent. “A lot of people’s lives have been ruined by living over here.”

In other cases, tenants say the landlord’s recent efforts to make repairs have left them without basic necessities.

Maria Gonzalez did not have a working bath or shower for days after workers responded to complaints about a foul odor emanating from the plumbing. She was further angered when she said a maintenance worker entered the one-bedroom apartment she shares with her husband and 16-year-old daughter without permission while the teenager was home alone. To clean herself before her janitorial job at a local hospital, Gonzalez had to fill a bucket with water from the sink.

“Another day without bathing,” said Gonzalez, 50, throwing up her hands in her bathroom on a recent afternoon after five days without an operable shower. “When are they coming to finish?’

Another tenant said her shower has been offline for more than two weeks while undergoing repairs. She’s had to wash her 5-year-old son in the kitchen sink.

Tenants said they want the landlord to relocate them when doing major construction in their units and to assure them that all contractors are licensed and taking adequate protections when working with lead paint and other health hazards.

Galardi, the city chief inspector, said that tenants should file complaints to the housing department if bathing facilities are inaccessible or if they believe unlicensed construction is occurring, and that the department would respond immediately.

To date, Galardi said, the city hasn’t ordered the relocation of any tenants nor declared any apartments in the complex uninhabitable.

Over the past month, Chesapeake residents have gone to City Hall to plead their case in person and also protested outside Pama Properties’ corporate office in El Monte.

Morris said that tenants have to maintain pressure because history shows that public agencies haven’t helped them.

“The question is still there as to how the hell this place has been passing inspections all of these years,” he said.