Heavy mold growth was found in the linens used at two University of Pittsburgh Medical Center hospitals where five mold-infection-related deaths occurred since October 2014, according to a report.

The report, which the medical center received in May 2016, was filed January 19, 2017 with the Allegheny County Court of Common Pleas in two wrongful-death lawsuits brought against the hospital system by the families of the deceased.
Daniel Krieg, 56, died with a mold-related infection after a kidney transplant a month after the report came out. He was the fifth transplant recipient to succumb to a mold infection in the transplant units at University of Pittsburgh Presbyterian and Montefiore campuses in Allegheny County, Pennsylvania. His family and the wife of Che DuVall, 70, who died from infection complications after a lung transplant are suing the hospital for wrongful death of their deceased loved ones.
In the cases of two other patients who succumbed to the mold outbreak, the medical center settled without litigation for $1.35 million each. A third patient was an unnamed individual in the transplant unit at the Montefiore campus.
The University of Pittsburgh Medical Center commissioned the report confidentially from hospital environmental specialists Andrew Streifel and Michael Buck in September 2015, after three people died.

The 16-page analysis documents evidence of mold at the hospitals and in nearly every tested area of the Paris Healthcare Linen facility, which handled the hospitals’ linen, in Dubois, Pennsylvania.
Pittsburgh lawyer Brendan Lupetin filed amended complaints on behalf of Kreig’s family and Che DuVall’s wife this week, submitting the lab reports and bringing Paris Cos. into the suit as a defendant. Lupetin demanded a jury trial in the new complaints.
Paris Cos. said it cannot comment on ongoing litigation, but CEO Dave Stern said in a statement, “Every day, Paris Companies processes and delivers hygienically safe linens to hospitals and health care institutions across Pennsylvania, New York, New Jersey, Ohio and West Virginia.”
The medical center said in a statement that it cannot comment on allegations but will “continue to work closely with health officials to ensure the safest possible environment for patient care.”
When Streifel and Buck went to the hospitals and tested linen from Paris Cos., a cart of wet sheets delivered to the Montefiore laundry storage area bore “heavy fungal growth of Mucor and rhizopus,” according to their report.
Among the findings at the laundry facility, the report said, was a heavy buildup of lint and mold near the vent through which unfiltered air dried linens that went to University of Pittsburgh Medical Center facilities.
Krieg and DuVall both had rhizopus-positive pneumonia infections that required having multiple lobes of their lungs removed, according to their autopsy reports from the medical center. They both later succumbed to the infections they caught after their transplant operations.
The hospital system continues to contract its linens from Paris Healthcare Linens, according to spokeswoman Allison Hydzik. As of May, the system furnished 22 of its 25 hospitals with Paris linens, according to the report, but Hydzik would not confirm whether this is still the case.
These molds are commonplace, and most people aren’t susceptible to infections caused by mucor and rhizopus. But they can cause serious problems for immune-suppressed individuals, such as those who have had a transplant or are receiving chemotherapy.
“In transplant patients with suppressed immune systems these fungal infections are infrequent, but do occur at most major transplant centers without any discernable source,” the University of Pittsburgh Medical Center said in a statement.
Streifel made several recommendations to Paris Cos. in his report and shared his informal findings with company officials during his visit.
Health care linen services are bound by Healthcare Laundry Accreditation Council standards. The nonprofit accreditation organization requires accredited laundries to maintain facilities like their clean laundry storage areas must be designed to prevent accumulation of dust and lint. Laundries apply for accreditation and must pass inspections to receive and maintain the three-year accreditation, reapplying when it expires.
As to whether Paris Linen was up to those standards, “that would not be my opinion,” Streifel said.

CDC and Department of Health respond

The hospital system has been in contact with the Pennsylvania Department of Health and the Centers for Disease Control and Prevention about the findings, according to Hydzik. 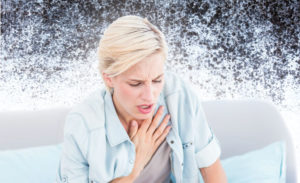 CDC spokesman Tom Skinner confirmed that the agency received a copy of the report in the “late spring or early summer.”
Streifel joined conference calls with the hospital, the state department of health and the CDC after presenting his confidential report, he said.
“We figured (the report) would never come forward,” he said.
“The facts of this investigation don’t support the conclusion that infections resulted from exposure to linens,” Pennsylvania Department of Health spokeswoman April Hutcheson said. “At this time, there is no evidence of an ongoing outbreak. We continue to provide consultative support to UPMC and will investigate as warranted.”
The medical center called CDC officials into the two hospitals to investigate the outbreak in September 2015. The Cardiothoracic Intensive Care Unit was temporary closed, and the 20-bed ICU was evacuated and cleaned.
A week after Streifel submitted his report in May, the CDC published comments about that visit but didn’t mention the new report.
In the CDC review, the fatal infections were not attributed to the mold-covered linens but rather to ventilation that may have allowed dust and mold spores to enter the hospital rooms.
Lupetin, the families’ attorney, hopes the report will prompt the CDC to return to the hospitals to reopen its investigation, but state officials must invite their federal partners to visit. “CDC, state, local and hospital officials completed their investigation and issued a report last year. The agencies stand by this report and there’s no evidence of any ongoing outbreak. If state and local officials deem more work is needed and ask CDC for assistance then CDC will assist,” Skinner said in a statement.
Article Source: http://edition.cnn.com/2017/01/28/health/moldy-hospital-bed-linen-deaths/
On February 25, 2017   /   mold, mold inspection, mold inspector   /   Leave a comment