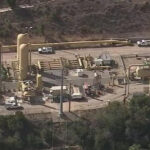 “Let there be no mistake about the impact this leak is having on the families in Porter Ranch.  Almost 300 families had to evacuate during this holiday season. The families in this community live here because it is supposed to be safe, and now it is not.  Children and adults suffer from regular nosebleeds, headaches, nausea and vomiting.  These families have a right to live without toxic poisoning of their neighborhood.  The amount of methane being released from So. Cal. Gas’s gas injection well is estimated to be upwards of 50,000 kilograms of methane an hour, potentially accounting for a quarter of California’s total methane emissions every day the leak continues. Residents are afraid to open their windows, forced to perpetually run their air conditioners, and are finding oily residue in their swimming pools,” said Parris.

“Save Porter Ranch is also demanding the State Oil & Gas Supervisor immediately disclose all test data received from So. Cal. Gas regarding the chemicals being released.  DOGGR’s November 18, 2015 Emergency Order required So. Cal. Gas to provide this data, and thus, DOGGR should immediately upload this information to the internet.  DOGGR’s failure to provide this information only increases the concern that DOGGR may be protecting So. Cal. Gas at the expense of the residents of Porter Ranch. The injection well that is leaking is one of 154 injection wells in this oil field including 93 active gas storage wells.  DOGGR’s prior emergency order did not order So. Cal. Gas to immediately stop injection activity in this field, and DOGGR’s failure to act is increasing the risk to the community,” added Parris.

In the letter to state officials, Parris writes, “In sum, Save Porter Ranch demands that DOGGR issue an order by December 3, 2015 that provides the following protections to the families of Porter Ranch:
1.      So. Cal. Gas must cease all injections other than injections approved by DOGGR to stop the massive leak.
2.      DOGGR must disclose all chemicals detected in air quality tests as provided by So. Cal. Gas and any government agency.
3.      DOGGR must investigate and confirm no other injection activities by other operators are impairing the ability of So. Cal. Gas to stop the leaking well.”