is a synthetic, organic chlorine compound derived from biphenyl,

which is a molecule composed of two benzene rings. The chemical formula for a PCB -Polychlorinated biphenyls (CAS number 1336-36-3 ) is C12H10−xClx. There are 209 configurations with 1 to 10 chlorine atoms, of which about 130 are/were used commercially.[1]:2 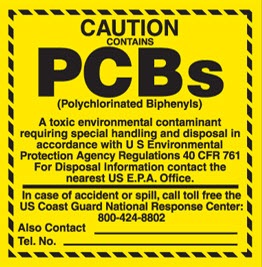 Polychlorinated biphenyls were widely used as dielectric and coolant fluids in electrical apparatus, cutting fluids for machining operations, carbonless copy paper and in heat transfer fluids.[2] Because of PCBs’ environmental toxicity and classification as a persistent organic pollutant, PCB production was banned by the United States Congress in 1979 and by the Stockholm Convention on Persistent Organic Pollutants in 2001.[3] The International Research Agency on Cancer (IRAC), rendered PCBs as definite carcinogens in humans. According to the U.S. Environmental Protection Agency (EPA), PCBs cause cancer in animals and are probable human carcinogens.[4] Many rivers and buildings including schools, parks, and other sites are contaminated with PCBs, and there have been contaminations of food supplies with the toxins.

Some PCBs share a structural similarity and toxic mode of action with dioxin.[5] Other toxic effects such as endocrine disruption (notably blocking of thyroid system functioning) and neurotoxicity are known.[6] The maximum allowable contaminant level in drinking water in the United States is set at zero, but because of water treatment technologies, a level of 0.5 parts per billion is the de facto level.[7]

The bromine analogues of PCBs are polybrominated biphenyls (PBBs), which have analogous applications and environmental concerns. 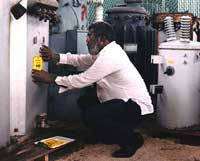 Polychlorinated biphenyls, in short PCBs, are a group of man-made chemicals.

1.1 PCBs have been used in many different products, including electrical equipment, surface coatings, inks, adhesives, flame-retardants, and paints. PCBs may be released into the environment, for instance when waste that contains PCBs is incinerated or stored in landfills. About 10% of the PCBs produced since 1929 still remain in the environment today. Because of possible impacts on human health and the environment, the use and production of PCBs are now banned or severely restricted in many countries. More…

1.2 All PCBs are man-made and have a similar basic structure. They are made of carbon, hydrogen and chlorine atoms. Because these atoms can be combined in many different ways, a total of 209 different PCB molecules can be formed. Some PCBs are more harmful than others.

Generally, PCBs are very stable which explains their persistence in the environment. At high temperatures, PCBs can burn and generate dangerous by-products such as dioxins. PCBs tend not to evaporate or to dissolve easily in water. However, they are very soluble in fat and similar substances, which explains why PCBs can build up in animal fat and along the food chain.

PCBs tend to build up in living organisms both by uptake from the environment over time (bioaccumulation) and along the food chain (biomagnification). PCBs remain stored in fatty tissues much more than in muscles or other body parts.

The degree of PCB bioaccumulation over time depends on how quickly they are taken up and eliminated by the organism, and on the ability of the organism to break down PCBs. Various animal species can transform some PCB congeners, such as insects, crabs and vertebrates, including some birds, fish, and mammals. The rate and physiological mechanism of PCB metabolism depend both on the animal species and on the specific PCB congener.

In aquatic organisms bioaccumulation of PCBs depends on the species, its habitat, and on the specific type of PCB. As the concentration of PCBs in sediments is several times higher than in water, levels are often high in bottom-feeding species.

PCBs generally biomagnify along the food-chain, which leads to greater PCB concentrations in organisms that are higher up in the food chain.

In indoor air PCB concentrations in the early 1980s were typically at least ten times higher than in the surrounding outdoor air. This may be due to the fact that PCBs are emitted by certain electrical appliances and devices (such as fluorescent lighting ballasts) and building materials (such as elastic sealants).

In seawater, in industrial areas, PCB levels were observed to be at least 100 times higher than further off-shore, based on samples of water taken from the upper few millimeters of the surface. Particularly high concentrations were reported in the North Sea (0.3–3 ng/litre) and in Galveston Bay, a highly industrialized area in Texas, USA (3.1 ng/litre between 1978 and 1979).

In fish, reported PCB levels have dropped significantly. For example, PCB concentrations in trout from Lake Ontario decreased by 80% between 1976 and 1994. For several fish species from the Great Lakes, the PCB concentrations in samples collected in the 1990s were generally below 1 µg/kg wet weight.