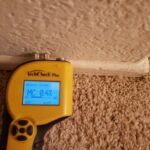 A number of mold testing and removal companies FOX 5 reached out to said they have seen a spike in business. One company said business has more than doubled and another said this has been one of the busiest weeks they have seen in years.

Mold has kicked Fernando Perez’s daughter out of her room in her Del Mar home.

“She’s obviously not very happy about it,” Perez said.

Recently, Perez said his teenager noticed a spot on the ceiling that appeared to be wet and stained. He called professionals to take a look — who in turn told him his family not only had a leak, but a mold problem in the already nearly renovated room.

“You would never know by opening this up that you would see that it would have been this bad,” Perez said as he showed FOX 5 the wall that was infested with mold.

Orange Restoration, a company that removes mold, stepped in to help. Owner Yaron Lief said the wet winter months have kept him and his employees busy answering calls.

“The average would be five or six a day and now we are maybe at 25 a day,” Lief said.

“If you see a discoloration I would recommend to send a picture. It’s the cheapest way to do this. Find a legit company send them a picture,” Lief said. “We can tell you if you actually need us.”

In this case, the Perez family said professional help was needed and they are glad they acted fast.

“It’s scary to think that people, if they’ve got leaks and they don’t see through to the dry wall and you don’t know it and people are sensitive, or have allergies, or asthma issues. God forbid the potential health issues you could have from unknown mold,” Perez said.