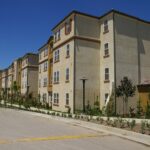 Many of the summer interns — came home to Mitchell Hall at The George Washington University to find ceiling tiles being removed from dorm hallways. Found under some of those tiles, was what appears to be mold.

Vincent said the ceiling tiles revealed pipes with black splotches. Vincent said she is concerned about the air she is breathing and feels the university hasn’t been as upfront as it should be about the situation.

“They haven’t been able to declare that the mold is safe, that the air is safe, or just in general that we’re safe,” Vincent said.

Crystal Nosal, a spokesperson for GW said the discovery was made on Thursday during a ceiling project, which started sooner than expected. After the mold was found, Nosal said the work was stopped and mold experts were called in to examine the hall.

“We don’t believe that there is an immediate danger to occupants,” Nosal said.

HEPA air scrubbers, which are used to clean the air of mold, could be seen against a wall in the building’s lobby. Nosal said mold was found in several places and the remediation process is underway.

“We’re going to have to move the residents on floors four and seven, and any other residents who are concerned about the mold conditions, we are going to be moving them as well,” Nosal said.

On Friday night, residents could be seen wheeling out suitcases full of their belongings. That after an email went out to telling them the school would be relocating many of them since the work would block access in and out of the building.

Vincent said one problem during this situation has been a lack of communication about what is going on. Vincent, an intern staying at Mitchell Hall for the summer, said she thinks the school should have notified them about what was found.

Nosal said the ceiling tile work is part of a $10 million plan to renovate several buildings, including Mitchell Hall. She said the ceiling work was slated to begin next week, but workers started a couple days early.

“We do apologize for the lack of notification,” Nosal said.

Skylar Nicholson, another intern living in Mitchell Hall for the summer, came home on Thursday to the ceiling tiles coming down in the hallway outside her room. She said once she spotted what looked like mold on the exposed pipes in the hall, she removed a tile above her room and discovered the same thing.

The school has since moved her to another room, but Nicholson said she is unhappy with how long it took the university to acknowledge the problem.

“This has just turned into a nightmare,” Nicholson said. ” … The workers were walking around with masks yesterday and us students, we didn’t have anything.”

She said she has had several other issues during her stay, which she claims is unacceptable because she pays more than $3,700 to stay there for the summer. Nicholson wants the school to compensate residents for what they’ve been through.

Nosal said the school intends to do so.