Amid muck and mold, tackling a Texas-sized cleanup after Harvey 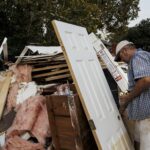 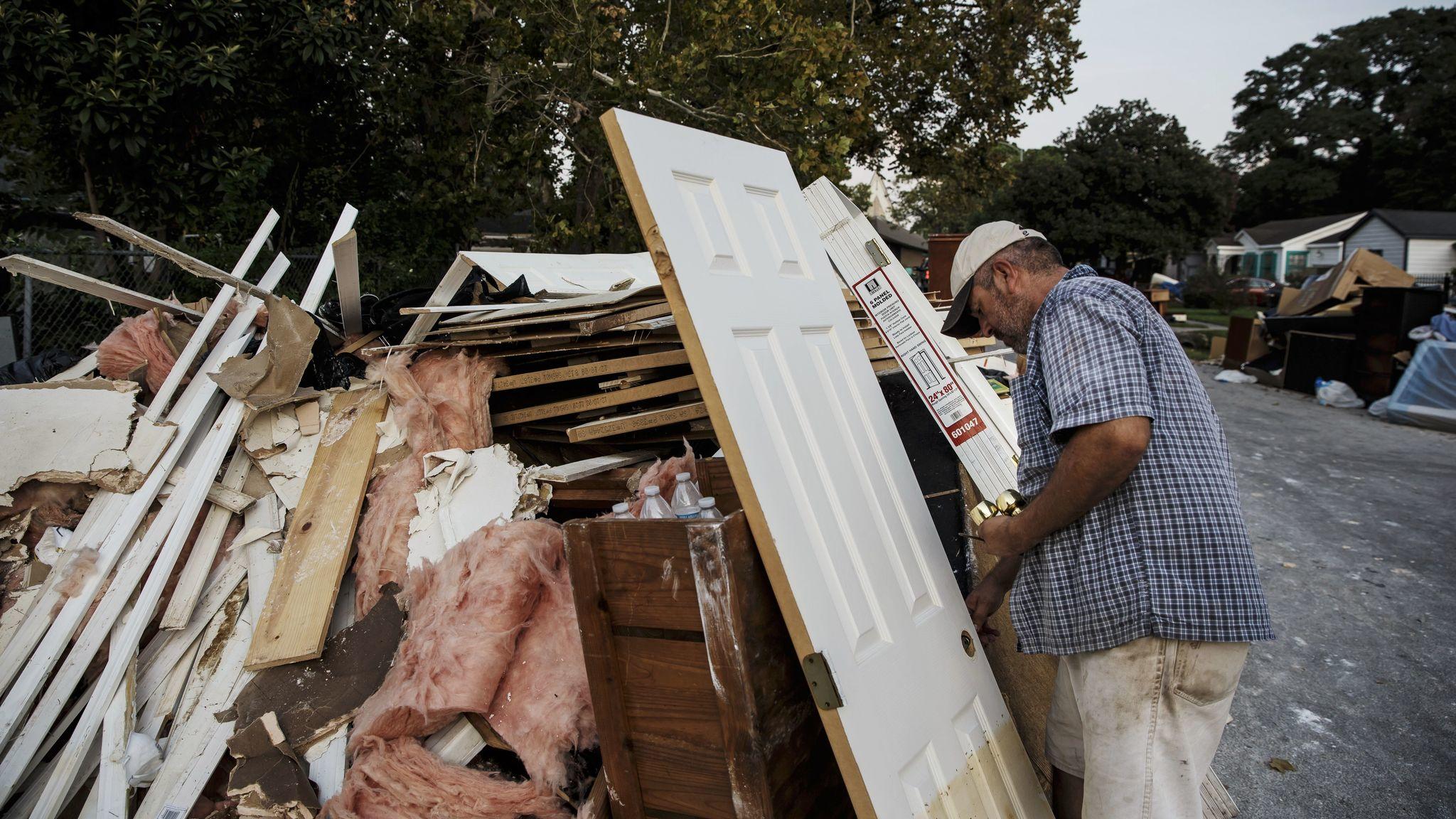 In Kashmere Gardens, a historically black neighborhood and one of this city’s poorest, the floodwaters have receded, but sorrow is on full display in the piles that line the street.

A television. A teddy bear. Family photographs and a Holy Bible, thick and leather-bound.

It smells musty. Sour, even.

Ten days after then-Hurricane Harvey blew into these people’s lives — then lingered for days as a weakening storm, dumping epic rainfall on the nation’s fourth-largest city and its environs — the task of cleaning up is daunting. Much of it falls on individuals like Sonia Saldana and her family, and the strangers helping them.

Saldana watched from her driveway on Minden Street as a group of young volunteers from the Ahmadiyya Muslim community, clad in neon orange and yellow safety vests, hauled out drywall and insulation and threw it on her family’s growing pile by the curb. Inside, the house was virtually gutted, with walls ripped out and the furniture gone.

“I’m not a very materialistic person,” Saldana said. “We can replace our clothes, our bed, our furniture. But family, you can’t replace.”

As the grueling cleanup gathered pace, some of the flood’s vast array of dangers abated, if only slightly. The fire department in Crosby, 25 miles northeast of Houston, on Monday lifted an evacuation order covering a radius of 1.5 miles around a chemical plant where flames had erupted four days earlier.

Firefighters had carried out a controlled burn on Sunday of more potentially unstable chemicals stored at the plant, which were flammable unless kept cooled to a certain temperature.

By Monday, the storm’s death toll had surpassed 60, with bodies still being retrieved. Recovery efforts are expected to take years, at a cost that will run to $120 billion to $180 billion, by official estimates.

The personal toll is harder to calculate.

In Kashmere Gardens, the water rose as high as Saldana’s chest on Aug. 26, said the stay-at-home mother, who stands 5 feet 2.

Everyone she’s talked to plans to rebuild, she said, because this neighborhood is home. Her family does too.

Already, Houston has become two cities: a downtown once again bustling, with bars and restaurants full of patrons, businesses reopening and public transportation up and running again. Then there are the flood-ravaged neighborhoods where homeowners by the thousands are carrying out a vast do-it-yourself recovery effort, with most lacking flood insurance to help pay for it.

A few streets over from the Saldanas’ house, a man eyed the detritus on both sides of the street and assessed it this way: “Piles of people’s losses.”

Some losses, of course, went far beyond the material. Across town, grieving relatives were making funeral arrangements for Alonso Guillen, a 31-year-old volunteer rescuer whose body was recovered Sunday. His boat capsized last week while he and two friends were navigating treacherous floodwaters in search of those who needed saving.

Born in Mexico, Guillen was a so-called Dreamer, an immigrant brought illegally into the U.S. as a child. He was protected from deportation after enrolling in the Deferred Action for Childhood Arrivals program, which President Trump is said to be tentatively poised to scrap, with the order delayed for six months to give lawmakers a chance to find an alternative.

Guillen’s mother, who is applying for legal status, told the Houston Chronicle from her home in Piedras Negras, Mexico, that she had been turned back at the border while trying to travel to Lufkin, Texas, for the funeral, which was to take place Tuesday.

Back in Kashmere Gardens, Bridget Henderson looked on as possessions that had symbolized the joy of new life joined the scrap heap. After she gave birth to a premature baby girl a month ago, her family threw a baby shower, lavishing her and her husband with gifts — now ruined.

As the neighborhood flooded last weekend, Henderson and her family were evacuated from their home on Pardee Street, riding away on a city dump truck. On Sunday night, family members turned the damaged house inside out, hauling out furniture and other items.

Henderson has asthma, so she’s been trying to keep her distance, at least as much as possible. Amid a watery landscape now rife with public health threats including mold, filthy debris and sewage-filled flood remnants, authorities have advised people with respiratory issues to be particularly careful during cleanups.

The water invaded Henderson’s home on the night of Aug. 26, 24 hours after the hurricane made landfall.

“I was like, ‘Jesus, please don’t let this water keep rising,’” she recalled. “I don’t want it to touch my baby.”

Her eyes teared up when her husband came out of the house carrying a brand-new white cradle and threw it on the family’s growing garbage heap.

Nearby, a little boy wore a white mask over his nose and mouth as he rode his tricycle. On either side of the street, piles of trash towered over him.

For some who watched Texas’ ordeal from afar, new storm perils loomed. Hurricane Irma, a Category 4 storm, approached the islands of the eastern Caribbean on Monday, bringing with it the threat of battering waves, landslides and floods. Puerto Rico’s governor declared a state of emergency, and residents began battening down.