With smoke from wildfires, valley air quality looks unpredictable for near future 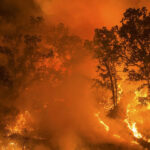 With wildfires burning throughout the state, in addition to recent local grass fires, the San Joaquin Valley Air Pollution Control District continues to warn the public about poor air quality, including incidents of severely bad air that may occur sporadically in the coming days.

For a few hours late Saturday, the amount of fine particulate matter (PM 2.5) in the air spiked in Bakersfield and all eight counties across the San Joaquin Valley air district, to a Level 5, the highest level, where all people are advised to remain indoors.

By the next day, Bakersfield had clearer skies and air quality was back down to a moderate range. District officials said winds temporarily pushed smoke into the valley during that several hour period.

Because the air can be safe at one point in the day and dangerous at another, depending upon wind flows, Melching said an air quality alert is standing for all areas.

On Saturday, regions farther north in close proximity to the fire were substantially affected, Melching said, with Oakhurst in Madera County reaching a PM 2.5 concentration of 246 micrograms per cubic meter. It takes only 75 micrograms to reach level five risk. Bakersfield hit 87 micrograms that same day.

“We can’t quite say who is going to be impacted the most and when…It doesn’t mean that every single day our air quality is bad,” Melching said.

Glen Stephens, air pollution control officer of the Eastern Kern Air Pollution Control District, said the district has not released any alerts, but is tracking the smoke levels. He said there is less of a concern in eastern Kern County and mountain areas compared to valley locations like Bakersfield, but that there is still poor air quality.

“It’s generally bad. Right now it’s bad because of ozone, not because of the fire,” Stephens said.

The best way to know whether it is safe to be outdoors is by tracking your location on the Valley Air app or online at valley air.org. It is especially important for sensitive groups such as the elderly and those with asthma to remain cautious and updated.

Melching said to also be aware of the potential for ash in the air, which is most likely when temperatures cool down and is not monitored in the air quality levels.

“If you smell smoke, or if you see ash falling, you are being impacted,” Melching said.

Ways to reduce your risk of being affected by the smoke are to limit outdoor exercise, stay hydrated, change your air air filters and keep windows shut.