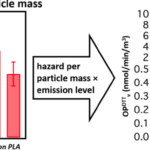 Last week, 3D printer manufacturer RIZE became the first company to attain UL 2904 GREENGUARD certification for its RIZE One 3D printer. The certification, which addresses 3D printer particle emissions and safety, followed a multi-year study conducted by the Georgia University of Technology and UL, a leading global safety science company. Now, the Georgia University of Technology has revealed more about the findings of the study and the impact that 3D printerscould have on indoor air quality.

Ever since the advent of desktop 3D printing technology, the question of safety has been a concern, especially regarding volatile organic compounds (VOCs) and ultrafine particles (UFPs) in the surrounding air. The study conducted by the Georgia University of Technology and UL has arguably been one of the most comprehensive and in depth investigations into the topic.

The multi-year research project has sought to characterize 3D printer particle emissions in a controlled environment and identify solutions for 3D printer manufacturers and users. The most recent study conducted as part of the ongoing research looked specifically at the particles’ potential for toxicity.

A study published last month in the journal Environmental Science & Technology shows that there is indeed a health risk associated with the particles emitted into the air by FDM 3D printers. Specifically, particles emitted from 3D printers can have a negative impact on indoor air quality and can harm respiratory health.

In the study, the researchers collected particles created by the 3D printing process and conducted various tests to assess the risk and impact of the particles on respiratory cell cultures. As Rodney Weber, a professor at the Georgia Tech School of Earth & Atmospheric Sciences, said: ”All of these tests, which were done at high doses, showed that there is a toxic response to the particles from various types of filaments used by these 3D printers.”

The new findings build upon the team’s existing research which found that hotter printing temperatures resulted in higher emissions, meaning that higher temperature filaments, such as ABS, created more particles than filaments with lower melting temperatures, such as PLA.

In the recent portion of the multi-year research project, the team partnered with the Weizmann Institute of Science in Israel to test the impact of the 3D printer emissions on live cells. These tests consisted of exposing human respiratory cells and rat immune systems cells to varying concentrations of the 3D printing particles. Interestingly, the tests found that both ABS and PLA had a negative impact on cell viability and that PLA actually prompted a more toxic response. However, these tests did not reflect actual exposures.

“The toxicity tests showed that PLA particles were more toxic than the ABS particles on a per-particle comparison, but because the printers emitted so much more of the ABS, it’s the ABS emissions that end up being more of the concern,” Weber explained. “Taken together, these tests indicate that exposure to these filament particles could over time be as toxic as the air in an urban environment polluted with vehicular or other emissions.”

The recent study also found that particles emitted when printing ABS filaments had different chemical characteristics than the ABS filament itself. For users, this means that certain brands of ABS may have more particle emissions than others, depending on the additives in the material.

“When the filament companies manufacture a certain type of filament, they may add small mass percentages of other compounds to achieve certain characteristics, but they mostly do not disclose what those additives are,” said Weber. “Because these additives seem to affect the amount of emissions for ABS, and there can be great variability in the type and amount of additives added to ABS, a consumer may buy a certain ABS filament, and it could produce far more emissions than one from a different vendor.”

Another aspect of the study looked at which indoor environments would put users at the most risk. Commercial building settings—like a school or office—were generally found to have a lower risk of emission exposure because of better ventilation systems. 3D printers in a residential setting with less sophisticated or efficient ventilation could have a higher risk of exposure.

How to reduce emissions exposure

Thankfully, there is no need to immediately panic or pack up your desktop 3D printer. UL and Georgia Tech have released a handful of measures that 3D printer users can take to reduce the risk of emissions exposure. They include operating desktop machines in well-ventilated areas, using the lowest nozzle temperature possible (dependent on the filament), standing away from 3D printers while in operation and using 3D printers that have been tested or verified for low emissions.

With more comprehensive knowledge about how 3D printers affect out environment and our health, we can hopefully also count on 3D printer manufacturers to take emissions into consideration when designing new 3D printer models.