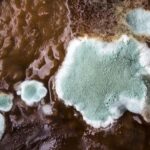 A new air sampling study done at the Cornell Cooperative Extension building on Griffing Avenue found “unacceptable” indoor air quality due to the presence of high numbers of mold spores in rooms on the second and third floors of the building.

Spore counts of Aspergillus/Penicillium in five rooms made indoor air quality in those rooms unacceptable when an environmental consultant conducted a one-day mold sampling at the building on Aug. 23, according to the consultant’s Sept. 30 draft report, a copy of which was obtained by RiverheadLOCAL.

Aspergillus is a very common mold found both indoors and outdoors and breathing in Aspergillus spores isn’t considered harmful to people with healthy immune systems, according to the federal Centers for Disease Control and Prevention.

“However, for people who have weakened immune systems, breathing in Aspergillus spores can cause an infection in the lungs or sinuses which can spread to other parts of the body,” according to the CDC.

Ascospores, Basidiospores, Cladosporium, Stachybotris/Memnoniella and unidentifiable spores were detected in the building by the air sampling conducted by Apex on Aug. 23. The number of these airborne spores in the samples did not render indoor air quality unacceptable, Apex said.

The building, constructed about 18 years ago, has been largely vacant since June 2018, following widespread reports, during the prior year, of unexplained illnesses by Cornell Cooperative Extension staff, who complained of headaches, nausea, difficulty breathing, asthma attacks, chest pains, lightheadedness, mouth and throat irritations, burning, watery eyes, runny noses, metallic tastes and more, according to documents obtained by RiverheadLOCAL through a Freedom of Information Law request.

Extension staff members, who occupied most of the building, have been relocated to other county offices. Employees in the U.S. Department of Agriculture office on the first floor and the district office of County Legislator Al Krupski on the second floor have remained in the building.

Apex concluded that each of the rooms with unacceptable indoor air quality (rooms 317, 313, 310, 219, and 207) is serviced by the same rooftop HVAC unit, unit number 1. The county legislator’s office suite and the USDA offices are served by two other HVAC units. There are eight rooftop HVAC units serving the building. All are original equipment installed when the building was constructed in 2000-2001.

“Given the aging HVAC infrastructure and documented HVAC system malfunctions/leaks, the rooftop HVAC equipment continues to be considered a source of many of the indoor air quality concerns noted by the occupants,” the Apex report said.

The county legislature in July approved the purchase and installation of eight new rooftop HVAC units for building, at an estimated cost of approximately $450,000.

According to DPW, the county as of July had already spent about $250,000 on investigating and remediating various conditions at the building. Those costs included repairs to HVAC system components, cleaning and testing, including an industrial hygiene investigation by Apex, air sampling for carbon monoxide monitoring by Apex and a previous air quality study done by Enviroscience.

Last month, Suffolk County Comptroller John Kennedy said his office was looking into how the county spent more than $100,000 to investigate the air quality issues at the building before deciding to spend nearly half a million dollars to replace the rooftop HVAC units.