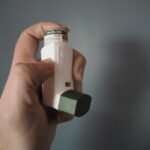 Asthma, obesity and air pollution disproportionately affect urban minority populations, and rates of vitamin D deficiency are highest among the black pediatric population, according to the researchers. Therefore, in this study, they sought to determine whether personal vitamin D status in a predominantly black urban cohort of children with asthma mitigates the effects of indoor air particulate exposure and whether any differences exist according to obesity status.

The study included 120 children aged 5 to 12 years with asthma (mean age, 9.7 years; 55% boys; 95% black) from Baltimore who were enrolled from the Domestic Indoor Particulate Matter and Childhood Asthma Morbidity (DISCOVER) study from 2009 to 2015. Serum 25-hydroxyvitamin D (25-[OH]D), asthma symptoms and fine particulate matter (PM2.5) exposure during a 7-day period were evaluated at baseline and every 3 months for 9 months. The average BMI across all children was in the 71st percentile and 36% were considered obese. The mean PM2.5 indoor exposure was 38.2 µg/m3 and the mean 25-(OH)D level was 19.1 ng/mL.