WARNING: Your Baby’s Sophie the Giraffe Toy Might Be Full of Mold 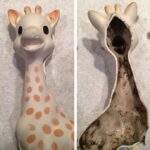 As a pediatric dentist, Dana Chianese recommends teething toys to parents every single day, including Sophie the Giraffe (which her two boys under the age of three prefer), but not anymore. A month ago she decided to clean the toy and noticed the air coming out of the hole smelled musty. “I decided to cut into Sophie out of curiosity and discovered a science experiment living inside,” Chianese told Goodhousekeeping.com. “Smelly, ugly mold living in my infant’s favorite chew toy!”

Chianese says she always cleaned the toy according to instructions, using hot, soapy water with a damp sponge and never submerging it into water. “It still hurts my heart to know that for months I allowed my babies to chew on moldy toys,” she says. “I no longer buy any chew toys with a hole or recommend any to my patients.”

And she’s not the only one: On Amazon, one reviewer tried to alert others to what she found when she cut the legs off of her child’s teething toy and even shared a picture for proof: “Beware!! If you have a drooly baby, moisture will get in the hole and you’ll end up with mold!” says Amazon user Stephanie Opera. “We’ve had ours for two years and the entire inside is coated with black mold!” 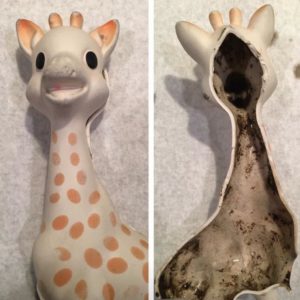 Meanwhile, a user on What to Expect shared her own pictures of the moldy toy. She says she only found the mold after she chopped off the legs after hearing reports of them getting caught in the throats of other babies. Let’s just say, she had no clue she was about the uncover the real danger inside.

Dr. Lyuba Konopasek, an Assistant Professor of Pediatrics at New York Presbyterian/Weil Cornell Medical Center told Care.com exposure to mold in toys is usually not something to be too alarmed about, unless your child has a immune disorder. However, if your child does have a mold allergy, they may start experiencing symptoms such as coughing or itchy eyes.

So what can you do? “The only way to prevent mold inside plastic toys is to make sure they are cleaned and thoroughly dried,” says Carolyn Forte, the Director of the Cleaning Lab at the Good Housekeeping Institute. The best way to clean washable plastic toys is in hot sudsy water or in the dishwasher. Then, disinfect them with a solution of 1/2 cup Clorox bleach per gallon of water. Soak them for five minutes, rinse and air dry.

How often you should clean these toys depends on the frequency of use. If used daily, Forte recommends cleaning them at least once a week. And don’t let these items sit in water or leave them with water trapped inside between uses or cleanings. See update below for more information.