What’s the Matter with Mold?

As a resident of frat ban-era Mid Faye, I have learned to deal with loud music until troubling hours of the morning, a common room with a singular chair and the “freshman plague” that has been floating around campus. And although my personal bathroom is a bit grimy, it certainly can be worse — at least I do not have mold. Unfortunately, not everyone is as lucky. 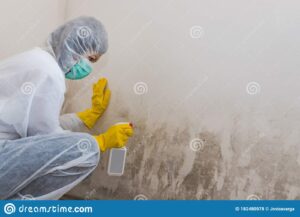 On Oct. 8, the student body received an email from interim Dean of the College Scott Brown stating that mold was discovered in the HVAC units in the Andres and Zimmerman dorms, two undergraduate residence halls in the East Wheelock housing community. Residents of the affected halls had to then make a decision of relocating to an area designated by the college or staying in their dorms, potentially being exposed to the mold growth.

There were mixed reactions. Zach Martel ’24, a resident of Zimmerman Hall, recalled that he had “slight emotional turmoil for like the first five minutes” after he received the email, but after realizing he had already been living there for a month, he rationalized that a few more days of exposure would not make much of a difference. He also noted that within his group of friends in his dorm, in classic Dartmouth fashion, the mold had become “more of a joke than actual concern.”

Nonetheless, not everyone had the privilege of being so nonchalant. Kate ’25, who requested that her last name be withheld for medical privacy reasons, is immunocompromised and is also a resident of Zimmerman Hall. She decided to move out — due to feeling unsafe with the moldy conditions and having recurring migraines — and was relocated several times by Dartmouth, including to the Hanover Inn and a temporary dorm.

“I’ve lived in five different places in a span of two weeks, so…  packing up all of my stuff to move each time and having to go back to East Wheelock to grab new stuff for the week — that’s been a little tough,” Kate said. “It’s really just complicated things with work, but most of my professors have been pretty understanding, especially because they informed professors about the situation.”

Furthermore, many students were unsure if they had reason to be worried, as there is an ongoing and persistent cold on campus, so many were uncertain as to whether their symptoms were due to mold or just the effects of living on a college campus.

Bronwyn Bird ’24, who lives in Andres Hall and has a roommate who chose to move out, said that her friends in the dorm, as well as her roommates are coughing a lot, but she was unsure if it was symptoms from mold exposure or just “the cold that’s going around.” Martel also has a sore throat and expressed similar uncertainty.

Microbiology and immunology professor Robert Cramer, who researches mold in the context of human fungal infections, said that it is difficult to know whether students are symptomatic due to a cold or the mold, but the most common symptoms of mold are allergy-like, including a runny nose and sore throat. However, he emphasized that the risk of infection is very low, noting  “there is not a severe health risk unless you are immunocompromised — and, even then, a lot of these particular molds can’t grow at human body temperature, so the health risk is minimized.”

Cramer also said that there is mold in every dorm on campus due to the moisture in New England — it is just a matter of relative exposure.

Jessica Weil ’21, who is currently living off campus, asserted that mold is “a thing that happens pretty frequently,” recalling that her off-campus apartment had mold in it this past year. Thus, residents of the impacted halls were surprised that Dartmouth had not found the mold sooner, especially because it is such a frequent issue.

“Given how many students are packing into every dorm. . . maybe they should be testing a bit more,” Bird said. “It makes sense to test buildings for safety hazards.”

Despite this, the College has moved relatively fast in fixing and cleaning the HVAC units that were affected by the mold. In fact, at the time of interview, two of the three students that live in the affected dorms already had clean HVAC units. Interim associate dean of student affairs Marianne Thomson, who is starting her first year at the College, stated that she was “impressed, being a relatively new member of the Dartmouth community,” at how quickly and head-on this situation was addressed.

From the Choates to the McLaughlin cluster, there is clearly a diversity of living conditions on campus. The mold outbreak in the Andres and Zimmerman dorms will certainly not be the last time there is an issue regarding residence halls at Dartmouth. So, as the HVAC units are repaired and the mold issue is cleared, students can return to worrying about other campus issues — the crazy Foco lines, the mysterious illness making its way across campus and the incoming freshman schmobs as the frat ban soon comes to a close.