Why Louisiana’s Air Quality Is Going From Bad to Worse, in 3 Charts 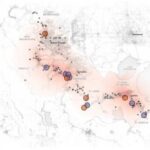 The chemical industry is growing rapidly in Louisiana at the same time that the state is backsliding when it comes to toxic levels of cancer-causing chemicals in the air. We investigated. Here’s what we found.

1. Louisiana is approving new chemical plants in areas that already have the state’s worst air quality — a region known as “Cancer Alley.”

We mapped estimated air toxicity levels along the lower Mississippi River using EPA data, then overlaid the locations of chemical projects that have been  approved or are  pending approval by the Louisiana Department of Environmental Quality.

Get Our Top Investigations

2. Nationally, fewer plants with high emissions are operating. Not in Louisiana.

The number of facilities in Louisiana that are required to report their toxic releases to the government has increased since the 1980s. Nationally, that number has decreased. Plants with 10 or more employees in particular industries, in possession of chemical quantities above specific thresholds, are required to disclose information on their toxic emissions to the Toxics Release Inventory, a program administered by the EPA.

3. Air quality is improving overall in the United States, but in Louisiana, progress has been slower.

Nationally, the estimated spread of toxic chemicals in the air has been going down since the ‘80s, but the reductions in Louisiana are not as large as in other high-polluting states.

We found the 10 states with the most high-polluting areas, as estimated by an EPA model. We then compared the average toxic air levels of the 50 most polluted areas in these states at two points in time — 1988 and 2017. Louisiana is among the least improved.

Each high-polluting area is a census block group, an area of varying size that typically has fewer than 3,000 people.

We compared the average toxic air levels of the 50 most polluted areas in these states at two points in time — 1988 and 2017.

ProPublica and The Times-Picayune and The Advocate looked at the states with the highest share of the most-toxic census block groups in 2017 and then examined how much improvement those states posted since 1988, when major sources of toxic air pollution began reporting their chemical releases to a national database called the Toxic Releases Inventory. A subsequent amendment to the Clean Air Act required those facilities to reduce their emissions with control technologies.

Our analysis found that a crush of new industrial plants will increase the air toxicity levels from cancer-causing chemicals in predominantly black and poor communities.

Our interactive map explores estimated air toxicity levels and the state’s system of dealing with toxic emissions in seven parishes along the lower Mississippi River.