Fungi (or mold) fruiting bodies typically grow outdoors.  This common mold or shelf fungi (or bracket fungus) will eat the old stump by digesting the wood and add natural features unique to this outdoor garden.

These pictures were taken and submitted by a Fun Guy client.  – Thank You! 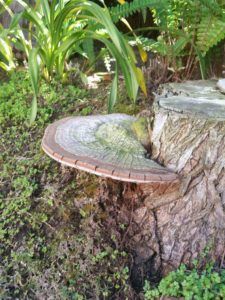 Wikipedia | Bracket fungi, or shelf fungi, are among the many groups of fungi that comprise the phylum Basidiomycota. Characteristically, they produce shelf- or bracket-shaped or occasionally circular fruiting bodies called conks that lie in a close planar grouping of separate or interconnected horizontal rows. Brackets can range from only a single row of a few caps, to dozens of rows of caps that can weigh several hundred pounds. They are mainly found on trees (living and dead) and coarse woody debris, and may resemble mushrooms. Some form annual fruiting bodies while others are perennial and grow larger year after year. Bracket fungi are typically tough and sturdy and produce their spores, called basidiospores, within the 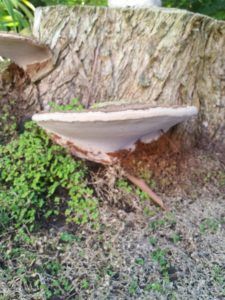 pores that typically make up the undersurface. 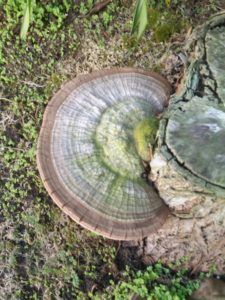 These fungi make shelves or brackets to produce spores above the ground. They are known as polypores (many pores) because the spore producing cells line pores. The pores make them different than many mushrooms. They also differ in not having a stem or only a short lateral stem. The boletes are the only mushrooms having pores instead of gills. The boletes have central stems and a fleshy texture. Shelf fungi are woody, leathery or fleshy. If fleshy, they do not have a central stem. Their pores range in size from tiny to large and are the same size within a species. Basidia, spore producing cells, line the walls of the pores. The spores have to drop down the pore into the air without sticking to the sides. The pores as a result are perfectly vertical. Occasionally, a shelf will continue to grow after a tree leans or falls. The new pores will be vertical, but at an angle to the old pores. Woody shelves that resemble horse’s hoofs are called “conks”. The confusion caused by all of these names is the reason scientists use scientific names. A scientific name is only used once for one species. 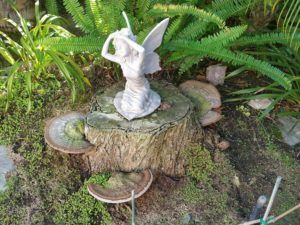 Woody shelves may be several years old. They add a new layer of spore tissue every growing season. The old layer is covered by the new one. These layers look like growth rings in a tree. One author reported counting 37 rings. Ten layers may mean the shelf is 10 years-old if there is only one growing season (spring). If there are two growing seasons per year (spring and fall), it may only be 5 years-old. One of the largest shelves weighs 300 pounds. Unfortunately, it isn’t known how many growth layers it contains.

Woody shelves are a micro (small) habitat. They provide a unique place for animals to live. Spiders, mites, and insects live in large shelves. A few of the insects are specialized and only found in shelf fungi. Some beetles are very slim so they can fit inside a pore. They hide in a pore and eat spores. There are enough insects and other animals that a food web is created. The spiders and some insects are predators that feed on other insects. Their prey include fly larvae and small insects.

Woody shelves are impossible to break with your hands and difficult to cut. This toughness results from the kinds of hyphae (filaments) that are used to construct the shelf. Easily crushed mushrooms are made of thin-walled hyphae. Some of the hyphae in woody shelves are thick-walled and the hyphae are interwoven making them tougher. They resist tearing or splitting because there are no planes to split along in the tissue.

The shelf fungi are a major wood rotting group. Once a tree is infected, the fungus cannot be killed. They cause millions of dollars in damage through lost wood production and lumber decay. The only treatment may be to harvest younger trees before the rot spreads too far. Cutting younger trees also has some negative effects. The loss of older trees has caused the local extinction of some shelf fungi. The infected trees also provide nesting sites for birds and squirrels. The rotten wood is easy to excavate and logs provide cover. These rots attack the top of a tree, the heart wood inside, and the base of the stem. The tree stem often breaks as a result even though the tree is still alive and has leaves. The mycelium, body of the fungus, decomposes chemicals in the tree cells. Brown rot is the result of a fungus not being able to break down lignin in the cell walls. Lignin is a large reddish brown molecule that makes cells stronger and more waterproof. White rots attack both lignin and cellulose (molecules in paper). The rotted wood is white because they tend to leave cellulose behind. Scientists are exploring the use of white rot fungi to convert wood chips to paper “pulp”. This “biopulping” technique reduces energy use and pollutants. White rot fungi can also destroy toxic chemicals like PCB’s in soil.

Artists use shelf fungi to make etchings and beads. The pore surface of the Artist’s Conk, Ganoderma applanatum, changes color when bruised. A nail produces broad lines; sharp needles produce very fine lines. An intricate etching takes a lot of patience and time. Beads are made by carving large shelves much like you would a block of wood.

Shelf fungi are used as herbal medicines. A bag on the body of the 5,300 year-old Ice Man mummy contained pieces of Piptoporus betulinus. This shelf fungus when eaten causes diarrhea. He probably carried it to control a whipworm infection in his colon. The reishi or Ling Chi shelf fungus, Ganoderma lucidum, is a traditional Asian medicine. Another herbal shelf fungus is Turkey Tail, Trametes versicolor.

Most shelf fungi are inedible because they are very tough. As a result, shelf fungi are ground into powder and used to make teas in herbal medicine. One edible species is the sulfur shelf or chicken-of-the-woods, Laetiporus sulphureus. The new, tender, layer of pore tissue is trimmed off and cooked. Although it is highly recommended, it causes stomach upsets in some people. Another highly recommended shelf fungus is hen-of-the-woods or sheep’s head, Grifola frondosa. Again, some people report problems eating this species.