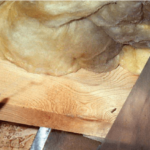 You may not think of air as “matter” in the scientific sense, but air IS matter. Like water, air is a fluid that flows. We know this instinctively when we stand outside, see and hear leaves rustling in the wind, and feel that wind on our faces. Wind is the physical confirmation that air moves or flows. Air also flows within buildings. Warmer air is less dense than cooler air, so warm air rises and cool air sinks. And just as water flows downhill, air moves from higher pressure to lower pressure. Untie a filled balloon and most of the air flows out. Air also flows from outdoors to indoors, and from indoors to outdoors. Operation of a heating or Cooling system with a leaky return duct can lower the air pressure in a basement. Then, soil gases (including moisture and radon) can be drawn into the basement through concrete-slab and foundation-wall cracks.Those gases will replace the air that would have flowed from the upstairs into the system. Then, the upstairs may become pressurized, forcing indoor air above the basement into openings in wall cavities or into an attic. 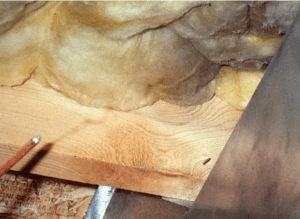 In newer, tight houses, just turning on an exhaust fan in the kitchen can reverse the direction of airflow at a chimney flue. In older houses that aren’t as tight, wind direction at the exterior can affect airflows indoors. If the wind is blowing against one exterior wall, exterior air will flow into that wall cavity through construction cracks and other openings. The wall cavity will then become pressurized, and air will flow from that cavity into the room. The room will become pressurized, and air will flow from that room into adjacent spaces.

What’s this got to do with indoor air quality?

Air flowing indoors can carry pleasant odors from room to room and level to level. If someone is cooking bacon in your kitchen, air can carry that aroma to another person who is on the second floor (and get them out of bed fast in the morning). And if someone in a bedroom puts on a liberal amount of perfume, people can smell the perfume before the person even enters another room. But odors can also be problematic for some people who are sensitized to some vapors – such as fragrances. Air can carry sewer-gas odors if there is a toilet somewhere with a loose toilet seal, and no one that I know enjoys THAT odor! Cigarette smoke is also carried on airflows.

We get a few calls every month from people who live in apartments or condos where they can smell their neighbor’s fragrances or cigarette smoke. It’s extremely difficult to prevent air from flowing from common hallways into units, and thus non-smokers can be exposed to second-hand smoke because their neighbors who are alongside or even several floors beneath them are smokers. And as we all know or should know, cigarette smoke contains many toxins, including formaldehyde, carbon monoxide and hydrogen cyanide. It also contains “particles,” which in this case are actually aerosolized liquid droplets. Indoor air carries these and other particles in its flows. If you don’t believe me, look closely at the air when it’s in a beam of sunlight, or shine a flashlight into a room at night when there are no lights on.

What are some of the particles that airflows carry indoors?

Much of the dust in the indoor air consists of human skin scales. Human beings lose between 30,000 and 40,000 skin cells every hour. During a 24-hour period, a person loses almost a million skin cells. The human body is made up of roughly 10 trillion cells in total – 1.6 trillion of which are skin cells. Skin scales from the scalp can carry yeast cells In addition to skin, indoor air carries a host of biological and non-biological particles including bacteria (which are small), soot, rust and soil particles, pet dander, pollen grains, car-tire particles, mold spores, and dust-mite and other microarthropod and insect fecal material.

Bacteria and viruses carry diseases. In addition, people who are sensitized can experience allergy or asthma symptoms when they inhale some biological particles.
I also believe that some non-biological particles such as soot, plaster and rust particles can cause health symptoms when inhaled because they act as “surrogate allergens.” For example, if mold and bacteria are growing in a rusty iron condensate pan (such as those found in heating/air conditioning systems), when the water dries out, rust particles carrying microbial allergens may be aerosolized. Then, someone inhaling the rust will be exposed to the microbial allergens. I’ve investigated buildings in which most of the airborne particles are soot or rust – not particles one would ordinarily think of as “allergenic,” and yet people in the building were experiencing allergy or asthma symptoms. Particles’ sizes and shapes are not all the same. A micron is one-millionth of a meter, and a human hair is about 100 microns thick. Household dust sizes range from smaller than .01 micron to 10 microns. Bacteria sizes range generally from .1 micron to 10 microns. Viruses are smaller: from between .01 micron and .1 micron to between .1 and .3 microns. Animal dander ranges from less than 5 microns to 20 microns, and mold spores from about 2 microns to more than 10 microns, depending on the species. Some airborne particles are small enough to remain airborne for extended periods of time or even permanently, while particles that are larger settle out of the air fairly quickly. Aspergillus mold spores, for example, remain airborne for a long time, and are small enough to be inhaled deeply into the lung. Stachybotrys mold spores, on the other hand, are larger and settle out onto surfaces fairly quickly.

I worry just as much about the presence of Aspergillus and/or Penicillium mold growth in a building as I do about the presence of Stachybotrys mold, which is often referred to as “toxic black mold.” Aspergillus and Penicillium mold spores can become airborne just by waving a notebook in front of the mold growth, whereas
Stachybotrys spores require more energetic agitation in order to become airborne, and they do not remain airborne as long as do Aspergillus and Penicillium mold spores. The shape of the particles also affects how long particles remain airborne. Larger, flatter particles (like skin scales) will remain suspended in
air longer than rounder ones, as long as the particles are similar weights. Many particles therefore remain in indoor air long enough to be inhaled by building occupants. Can air purifiers remove airborne particles? I often hear people ask me to recommend a type of air purifier. Well, my simple answer is “don’t use an air purifier that is ionizing or supposedly creates hydroxyl ions.” Ozone is produced by most of these devices and causes the smell of “fresh “Particle Settling Rate,” National Safety Associates, Memphis, TN, 1989. air.” But don’t be fooled; ozone is an irritating gas and is one of the main ingredients in smog.

To me, the larger and more important question is: can an air purifier “clean” the air? My answer to this is “not while the source or sources of particulate contaminants remain in the space.” Let’s assume that there’s a moldy rug in a room. If no one walks across the rug, the spores will not be aerosolized; as soon as someone walks across the rug, however, spores will be aerosolized. Someone sitting at a desk in that room will then be exposed to those spores. An air purifier in the room may remove some of the spores, but not all of them. It’s always best to remove the source or sources of airborne particles rather than depend on an air purifier to improve the quality of the air that you inhale indoors.

It’s always best to remove the source or sources of airborne particles rather than depend on an air purifier to improve the quality of the air that you inhale indoors.
Jeffrey C. May, CIAQP (Certified Indoor Air Quality Professional), combines his education as an organic chemist (B.A. Columbia College; M.A. Harvard University) and his twenty-five plus years of experience as a building consultant to specialize in residential indoor air quality. He is founder of May Indoor Air Investigations LLC, located in Tyngsborough, MA; is a former Adjunct Professor in the Department of Work Environment at U MA Lowell; and author or co-author of four books on indoor air quality, all published by The Johns Hopkins University Press: My House is Killing Me! The Home Guide for Families with Allergies and Asthma; The Mold Survival Guide: For Your Home and for Your Health; My Office is Killing Me! The Sick Building Survival Guide, and Jeff May’s Healthy Home Tips. A nationally recognized speaker and
author, Jeff is a member of the American Chemical Society, the New England Chapter of the American Industrial Hygiene Association, the Association of Energy Engineers, the Indoor Air Quality Association, and the Pan-American Aerobiology Association. He is also a former member of the AAFA national board and a current Board member
of the Massachusetts Association of the Chemically Injured (MACI). Jeff is a Certified Indoor Air Quality Professional (Association of Energy Engineers) and a Council-Certified Microbial Consultant (American Council for Accredited Certification). He holds a B.A. from Columbia in chemistry and an M.A. from Harvard in organic chemistry.
http://MayIndoorAir.com